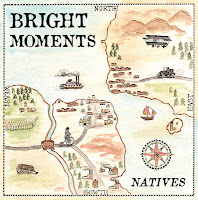 Kelly Pratt came to NYC a decade ago to play jazz but fell into the indie rock scene instead, playing with such stellar fixtures such as the Arcade Fire, Beirut and LCD Soundsystem.  He's also written his own material on the side, but it wasn't until this new project called Bright Moments that Pratt took the time away from touring to focus on producing an album.  The result is Natives, a solid collection of indie music recorded with similarly accomplished musicians.

This newly formed band appeared at the nice but tiny/dark Cameo Gallery in Williamsburg last month, and I was eager to seem them play the songs live.  Thankfully, Pratt's background in jazz allows an improvised approach to performance so things loosened up from the home studio creations.  It's always disappointing to hear things exactly as they sound in the recorded versions -- in my book you might as well stay home.  A band also needs to remember that any audience is looking to connect with not only the music but who's making it happen up on stage, something Pratt still needs to work on.  In an interview a few days before the gig, Pratt spoke with me over the phone about his transition to frontman as just moving a few feet over on stage but it needs to be more than that.  Not everyone needs to be an oversized personality like Mick Jagger or Wayne Coyne, but some sort of M.C. role would be helpful in performance, allowing fans to get to know the group.

During our chat, I had to ask Pratt about the last week of shows of LCD Soundsystem and the new movie about it, Shut Up and Play the Hits.  I told him how it was just one big dance party in Terminal 5 when I went to opening night, how there were circles of people everywhere so if you wanted to move through them you had to dance as well (which I happily complied).  Pratt was up on stage in back with the horn section so he chuckled in hearing this.  At the last night at Madison Square Garden (MSG), Pratt said it didn't feel like a swan song, it just felt like a regular gig though not really since it was at the epic center of MSG.  "But then you watch the trailer for the movie and it makes you want to cry," he told me.  So I'm not alone!

Link to interview/review on PopMatters here. 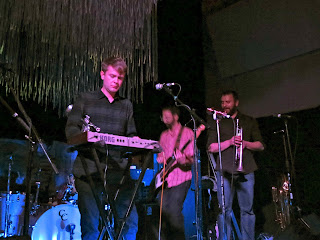 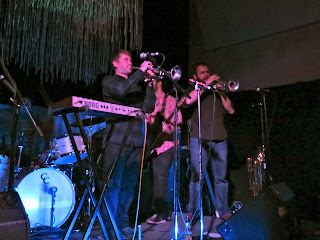