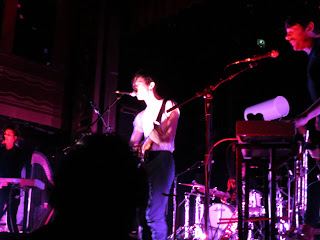 Going to concerts back to back is something I try not to do, especially if it occurs early in the week.  But I really wanted to see Fanfarlo, a U.K. band at Webster Hall the night after the Bombay Bicycle Club gig.  I loved their debut album, Resevoir, playing it over and over back when it came out in 2009.  Their latest release, Rooms Filled With Light, sounded promising but it wasn't hitting me in the same way.  Things seemed more labored and while the music sounded livelier/looser in concert, the older songs still stood out in comparison.  Also I was happy to pass over the photographer duties again, this time to PopMatters Events Editor Sachyn Mital, as Webster Hall is crazy dark and hard to capture (see my sorry attempt on this page).