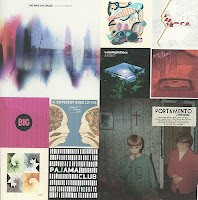 Here’s a new music playlist to indulge in before the onslaught of holiday music starts dancing in our heads.  Strong releases by Atlas Sound and The War on Drugs provide the backbone while newcomers Future Islands and The Drums serve as bookends.  See notes below -- listen at link here, enjoy!

1. “Stay Gold” – The Big Pink
English electro-pop duo The Big Pink has just released this single from their second album due in January, Future This.  The synth-heavy sound lends itself to the dance floor, while the straightforward lyrics create an instant sing along.

2. “Money” – The Drums
3. “Days” – The Drums
The Drums are an indie band from Brooklyn.  Singer Jonathon Pierce explained recently in a KCRW interview how they like to write short, sweet, simple pop songs and certainly shows in these two tunes off their second album, Portamento. Their somewhat derivative compositions are still hard to ignore, especially with such earnest intentions.

4. “Speaking in Tongues” (featuring David Byrne) – Arcade Fire
This is a bonus cut off the deluxe version of alt band Arcade Fire’s recent release, The Suburbs. It includes vocals by David Byrne, a natural nod to the Talking Heads who created an entire album with the same title.

8. “Tell Me What You Want” – Pajama Club
This band was formed by empty nesters Sharon and Neil Finn (of Spit Enz and Crowded House fame) after their kids left home in New Zealand to pursue their own musical passions.  With fun, funky undertones, the song off their first self-titled release is a sexy tribute to life after child rearing.

9. “Your Eyes” – Bombay Bicycle Club
This song is from the third release by the U.K. indie rock band, titled A Different Kind of Fix.  As the group continues to polish and expand its sound, singer Jack Steadman’s earnest vocals keep things grounded.

10. “Te Amo” – Atlas Sound
11. “Mona Lisa” – Atlas Sound
Atlas Sound is the solo project of Deerhunter’s prolific musician Bradford Cox. These two songs are off the third release, Parallax, but Cox recently explained to SPIN that he writes every day to fill a avoid, referring it to thumb-sucking.  “Mona Lisa” features the vocals and piano playing of Andrew VanWyngarden of MGMT.

12. “All We Ever Wanted Was Everything”– MGMT
This Bauhaus cover was included in a mix album, Late Night Tales: MGMT, recently released by the alt band.  It is a loving tribute in a compilation of “post-punk, cult indie and counter-culture figureheads” as hand picked by the group.

13. “Somebody That I Used to Know”  (featuring Kimbra) – Gotye
This newcomer to the U.S. scene is the stage name of Belgian-Australian Wouter “Wally” De Backer, a multi-instrumentalist singer/songwriter.   His international flair is making waves for this folksy tune with New Zealand singer Kimbra, a stinging musical attack on an ex-lover. The song is off Gotye’s latest release, Making Mirrors.

14. “Balance” – Future Islands
15. “Where I Found You” – Future Islands
This band from Baltimore took inspiration from the Outer Banks of North Carolina for their third full-length release, On the Water. From the sounds of waves to rolling melodies, these two songs tug at the heartstrings with singer Samuel T. Herring’s emotive vocals.
Posted by JaneJS at 3:52 PM
Email ThisBlogThis!Share to TwitterShare to FacebookShare to Pinterest
Labels: Arcade Fire, Atlas Sound, Bombay Bicycle Club, Future Islands, Gotye, MGMT, Pajama Club, The Big Pink, The Drums, The War on Drugs
Newer Post Older Post Home