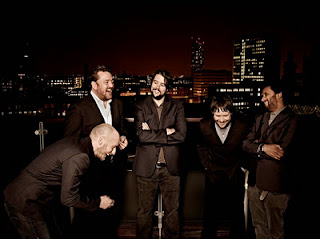 A special piece of music created by British alt rock band elbow for the 2012 Olympics in London is now in the final stages of production.  The theme will be used in promotional coverage before the games next summer as well as during the event.

“We are knocked out to be involved and it’s been quite a challenge,” says lead singer Guy Garvey.  His warm, distinctive baritone has been the signature of this band since it formed twenty years ago.  Their fifth album released last spring, Build a Rocket Boys!, is landing on many top ten lists for the year (for example, KCRW’s “Morning Becomes Eclectic” Jason Bentley).   I heard about the band just a few years ago as a devoted listener to KCRW, loving the song "One Day Like This" from their last album The Seldom Seen Kid.  Here's a video of Elbow performing the song when they stopped by the station last spring.  The full live session can be viewed/listened to here.