The Fairfield Theatre Company’s Stage One was sold out last night for the new DVD Chronology to benefit local npr station WPKN.  The documentary simply splices together footage from the band’s early days to 1983 and then jumps to their performance at the Rock and Roll Hall of Fame induction ceremony in 2002, which drummer Chris Frantz said at the time gave them “a happy ending.”  (So a nice way to fade out the DVD as well.)  It opens with a microphone test in a New York City kitchen just after Frantz had moved there in the mid 70s with fellow RISD classmates singer/songwriter David Byrne and bassist Tina Weymouth, who was also his girlfriend at the time.  This tightly knit group lived together at 195 Chrystie Street, a tough neighborhood in the Lower East Side but right around the corner from the iconic club CBGBs.  They rehearsed nights after working day jobs; creating songs together that they would take soon take to the stage.  In early gigs, they huddle together on stage and in interviews they are fiercely protective of each other’s quirks, as Weymouth once described Byrne’s behavior as “organically shy.” 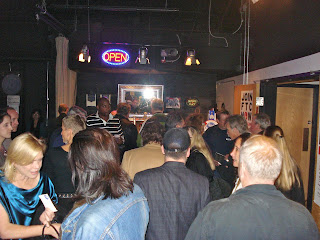 In 1978 the band opened for the Ramones and the rest is rock history.  At the Q&A afterwards with Weymouth and Frantz, Weymouth thanked everyone for “patiently sitting through [their] home movies but these moments in time belonged to most of the audience as well.  Beyond the spirit of reminiscence, there was a real sense at that time that this artsy pop music was something that had never been tried before.  In the early scenes, people looked somewhat perplexed by the sound – not sure how to even move to it yet soon new wave became the most danceable genre ever. Frantz explained that since they were art students, there was always an “artistic target” with their music.  They loved pop music but also art so the thought was maybe “pop music can be the best art ever.”  His idea to cover Al Green’s “Take Me to the River” became the first hit for the Talking Heads.  Frantz said he knew they had made it big when Dick Clark told them on his show, “I like you guys!”

Weymouth found being in the band “very daunting” but “really loved these boys” so kept at it.  (The original plan was for her to step aside but even Lou Reed commented how it was a “good gimmick” to have a chick in the band.)  It was her mother that essentially told her “you can do this.”  The couple also revisited their side project, the Tom Tom Club, and how that band kept the Talking Heads going since their songs were better received internationally.  Plus their influx of world music opened up American fans to receive global influences.  With its digitalized fim and remastered soundtrack, Chronology provides a rewarding trip down memory lane or a musical adventure for anyone.