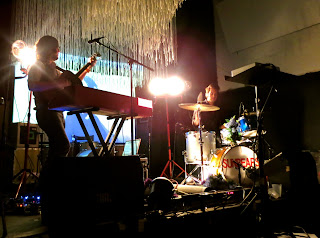 Sunbears! are described as a duo but the band plays out on stage weighted heavily towards Jonathan Berlin (singing while playing keyboards, guitars and synths), away from the solid drummer Jared Bowser.  These two are on the road in support of their first full-length release, You Will Live Forever, the title a reference to how the internet will never forget this generation with an eternal online imprint.  Its thirteen tracks are appealing, carefully crafted pop songs, not just compositions in a broad stroke of some musical genre.  However, when presented live at the Cameo Gallery in Williamsburg, the thrust of presenting everything exactly as it sounds on the recording kept things from any sort of emotional lift off. With prerecorded tracks of vocal harmonies, additional instruments and ample sound effects, the performance seemed as organic as the bouquet of plastic flowers decorating the drum kit.

The night even began as the album does, with the solo piano arpeggios of the instrumental lead off track, “You Will Live Forever.”  Then the band followed with the second song, “Give Love a Try,” their single with a simplistic message and basic though uplifting sing along chorus.  Many of the lyrics offered throughout the set were along the same vein, though the vocals buried throughout made a few words hard to discern.  For example in the song “Strung Out! On My Own!” Berlin sings with conviction, Love don’t go away never, so I’m fine with you leaving me. “Together Forever” begins with We know better than you, You know better than me/We’re in this together, forever and ever, can’t you see. His vocal delivery can sound a bit like Wayne Coyne, and with the musicians backlit with strobe lights and footage on a scrim in constant motion, the show was almost like a mini Flaming Lips concert.  It’s difficult to recreate songs produced after spending countless hours in a studio anyway, and the crowd would have enjoyed something different.