Next Monday there will be a screening of a new Talking Heads DVD, Chronology, at the Fairfield Theatre Company (70 Sandford Street, Fairfield right by the train station).  Doors open at 7 pm with a cash bar, with the movie beginning at 8 pm.  At $20 a ticket, it’s a worthy fundraiser for WPKN, the Fairfield County npr station. 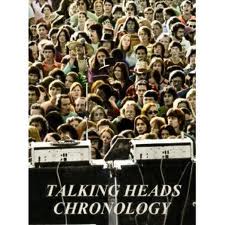 Chronology follows the band from it’s beginning days at CBGB to their final tour in 1983 supporting their Speaking in Tongues album (back in the days of vinyl!)  Their stop in Forest Hills is definitely on my top ten list for all time greatest live concerts.  The tour was also documented in Jonathan Demme’s feature film, Stop Making Sense.

A brief Q&A with band members Chris Frantz and Tina Weymouth will follow the event.  The couple live in Fairfield and are active in both the Fairfield Theatre Company and WPKN, where Frantz has a radio show on the last Friday of the month from 1 – 4 pm. For more information, visit fairfieldtheatre.org.
Posted by JaneJS at 12:52 PM
Email ThisBlogThis!Share to TwitterShare to FacebookShare to Pinterest
Labels: Chris Frantz, Talking Heads, Tina Weymouth
Newer Post Older Post Home