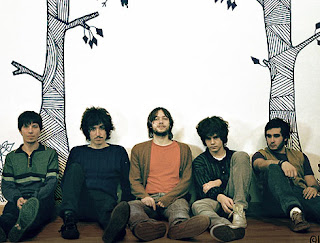 It's fun to see a band when you know only one of their songs, in order to see what else they've got going on. Such was the case for Polock, who just wrapped up their first tour to the U.S. with dates in New York City, Los Angeles and at SXSW. Papu Sebastián, lead singer and primary songwriter, named the group after the American Abstract Expressionist painter Jackson Pollock in honor of his own father who was an artist. However, the decision to drop an ‘l’ has music industry as well as new fans wondering about pronunciation and worrying about using an ethnic slur. While the band has been called a Spanish Phoenix, they also recall the band Ambulance LTD with their use of instrumentals to elongate pop song conventions, whether for introductions or breaks in the chorus. This deviation away from songwriting formats makes a nice payoff for listening live or otherwise.

The band took the stage during the hum of synths to begin “Nightshot” off their August 2010 release Getting Down From the Trees. By the third song in, they launched confidently into “Nice to Meet You,” which has been getting airplay in the States. The groove follows a guitar solo into a pure pop melody, only to crash into a instrumental break before the chorus. The shiny romanticism of “Defenceless” followed and the mood shifted into jazz riffs. Between songs, Papu thanked the crowd for coming many times and sheepishly acknowledged it was their first time in New York. The catchy tune “Fireworks” ended the set, fresh off this year’s itunes compilation for Rising Stars: Latin, but Polock has a widespread appeal for all.

NMMatterscorp YouTube Videos (not the best lighting in the place, dark!)
"Nice to Meet You"
"Sometimes"
"Fireworks"