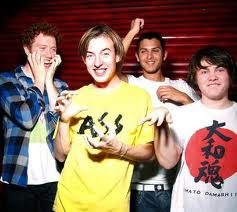 It’s always a thrill to be able to see one of the bands picked for one of my playlists playing in the area. After hearing their polished recordings over and over, it’s always interesting to hear the comparison live and of course, checking out what they really look like in real life. The Bombay Bicycle Club is a quartet from North London riding a youthquake out of the U.K. along with the Tokyo Police Club and Two Door Cinema Club, all offering tightly composed songs of indie pop. They played two shows at the Mercury Lounge before heading to SXSW with Oxford’s Jonquil as an opener - -a quartet that seemed more intent to bring a Vampire Weekend sensibility of calypso guitar to the scene. While naming your band after a flower is never a good idea, using another language is even worse. The singer looked like Guy Garvey of Elbow with the same warm baritone, but it all came off as a redo.

After an intro of Frank Zappa, Bombay Bicycle Club began their set with the kick drum and guitar of “Magnet” from last year’s release, I Had the Blues But I Shook Them Loose. The vocals ride atop the music, letting instrumental breaks become the chorus as they stepped back away from the microphones, bending over their instruments with a grand intensity of focus. The band knew they sounded good and the warm response by the crowd was met by smiles on their faces. Other songs from the release rounded out the set: “Open House,” “Dust on the Ground,” “Cancel on Me,” “Lamplight,” “Autumn,” “The Hill,” and “Evening/Morning.” Their single “Always Like This,” provided the highlight with a rolling dance beat and frontman Jack Steadman’s stylized vibrato singing. He called out to the crowd a few times saying how excited they were to be there and asking a simple question of "How's everyone tonight?" There was also an apology for taking so long to cross the Atlantic in order to bring their music to the U.S. The acoustic guitar of “The Giantess” quieted things down a bit before the closer, “Emergency Contraception Blues.”
Mercury Lounge asked for $250 at the door for filming video – don’t quite have the budget for that!