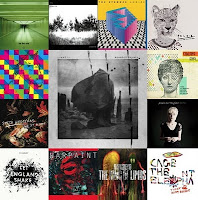 This playlist sat empty before hearing the buzz bands of SXSW and a few key releases of fave groups (Moby, The Strokes, Radiohead). It began filling up so fast, I've already started another. This is a good omen for another great year of new music. The list includes many band members who have grown up together, either in the same family or as childhood friends, which can only reinforce the notion that it's a good thing not to burn any bridges in your teens or otherwise. After the miserable winter in many parts of the country and heavy snows still pounding some areas, it's time to celebrate spring with a bevy of new bands and new tunes of some veterans. Link here to listen, enjoy!


1. Smith Westerns/Weekend
I heard plenty about this young trio from Chicago before this song got stuck in my head. The band was formed by brothers Cullen Omori and Cameron Omori with Max Kakacek when they were still in high school. Now just a few years later, this single off their second release provides incredibly catchy psychedelic pop to the indie rock scene.

2. Lykke Li/Get Some
3. Lykke Li/I Follow Rivers
This Swedish indie artist was born to punk rocker parents who moved the family around Europe many times. That international upbringing has created a mix of styles to accompany Lykke Li's powerhouse vocals. "Get Some" has received more airplay with its full throttle come on lyrics, but "I Follow Rivers" creates a more interesting soundscape for the listener.


4. Cage the Elephant/Aberdeen
This is another band that had hype to spare before a particular song warranted a serious consideration for my playlist. Kentucky's Cage the Elephant was also created by two brothers and a friend playing in a high school band which grew into a quintet with a big, busy sound. "Aberdeen" is off their second release from earlier this year called Thank You, Happy Birthday. The raw musical style is not over produced and can seem a bit messy at times. This song leaves all that for the ending which creates a nice payoff instead.

5. Chasing Kings/Empathy
This indie pop band has playing together for years but in 2009 they released an EP as Chasing Kings that is now receiving airplay. Three of the four members were in Boston attending Berkeley while their bass player was finishing up high school on the west coast, so they used iChat to complete the collection of songs. "Empathy" shows a strong sense of musical composition -- the introduction teases with a chord then sets in motion bouncy synths before the band kicks in and the melody churns until the singalong chorus.

6. Warpaint/Undertow
Warpaint is a female quartet out of L.A. that calls their music experimental art rock. The group includes childhood friends Theresa Wayman and Emily Kokal with a revised line up to complete last fall's full release The Fool. "Undertow" is a lush song of confessional lyrics and the wash of chill wave approached from a girl group sensibility.

7. Moby/Be the One
8. Moby/Sevastopol
Moby recently offered three new songs from his next release on his website for free. No longer the struggling artist for years now, he can indulge in the argument that art should exist for art's sake. During my PopMatters interview with him, he explained that the songs were "melodic atmospheric electronic music written in empty cities at 2 o'clock in the morning." The two songs here are instantly recognizable as classic Moby: heartfelt melodies over various dance beats that puts his insomnia to good use.

9. Jessica Lea Mayfield/Our Hearts Are Wrong
This 21-year-old from Ohio has already been writing songs for a decade. Her moody songs pull from both country and folk rock, with a minimalist approach to production that allows her warm alto voice and personal P.O.V. to shine.

10. Polock/Nice to Meet You
Polock has been called the Spanish Phoenix but it could just allude to a category that has plenty of room for more European indie pop bands singing in English. Led by singer/songwriter Papu Sebastián, the quartet deliver tight arrangements that only come from tons of practice. Simple keyboard chords meander along until the group jumps in and allows an instrumental jam to continue until the vocals are ready to introduce the melody. A rollicking drum solo proceeds each chorus, happily expanding the notions of songwriting conventions.

11. Dale Earnhardt Jr. Jr./Simple Girl
This band from Detroit has its gimmick just like the burlesque gals of Gypsy -- named after the race car driver, they even wear NASCAR jumpsuits to gigs and industry parties. But beyond the attention getting antics, there's a new approach to pop songs with sunny harmonies over layers of sampled vocals and a variety of hand percussion. "Simple Girl" sounds like a simple, fun song at first however there's a lot more going on in production.

12. The Strokes/Machu Picchu
13. The Strokes/Under Cover of Darkness
These two songs from Angles, the first album in five years, were also years in the making. After solo projects and a self-described "much needed hibernation period" the band reconvened with a more democratic approach to songwriting. "Machu Picchu" leads off the release and promises of an expansion of sound is thwarted by the next track, "Under Cover of Darkness." Here the group returns to their roots: a driving beat, buried vocals and wall of sound production -- not necessarily a bad thing.

14. Radiohead/Lotus Flower
The new release from Radiohead, King of Limbs, was announced on a Monday and released a day early before the weekend even started. It all sounds a little premature, a bit unfinished at times but diehard fans seem content with any offering. As the single off the album, "Lotus Flower" is the strongest track with Thom Yorke's vision fully realized from handclaps to echoing, etheral vocals.

15. The Dodos/Black Night
"Black Night" leads off the No Color, the fourth album just released from San Francisco's indie rock band, The Dodos. The drumbeat introduction is fitting for this percussion centric group that even uses fingerpick style acoustic guitars to achieve its mission. Meric Long's warm vocals float above the mayhem, keeping things human and in control.

16. PJ Harvey/On Battleship Hill
PJ Harvey's poetic eighth studio album, Let England Shake, deals with the history of war. She prides herself in expeimenting in styles and this time around much of the album was recorded live in an English church. The expansive sound was more of a collaboration with John Parish and Mick Harvey, who filled in sketches of songs written by Harvey.