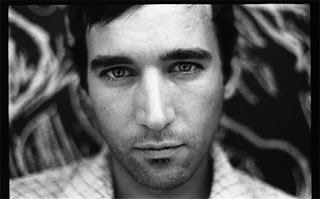 Sufjan Stevens (pronounced Soof-yan) has a new release out called Age of Adz (pronounced odds) and a tour which brings it all to life. With a dozen musicians, this new foray into electonica became a bold expression of the human condition. On the second/final night in New York City at the exquisitely restored Beacon Theatre, Stevens confidently led the group through his songs from front/center stage, playing banjo, synths and guitars as needed. He went through several costume changes, silvery neon outfits that evoked space suits, while singing the melody with the occasional choreographed gesture to match the background singers who he referred to as the “Solid Gold Dancers” at one point. The three women were certainly shaking it enough to qualify, that’s for sure. Easy banter filled the spaces along the set list, as Stevens touched on subjects as disparate as physics, prophecy and musicology. A huge video screen on the back wall was as busy as the performers on stage, projecting energetic cartoon drawings, patterns of lights and films of people moving wildly. Props such as streamers, beach balls and balloons gave the evening a playful aspect throughout.

The show began with the subdued “Seven Swans,” an older song from a release by the same name in 2004. Stevens then launched into his latest collection, introducing them to the crowd as songs about “death and life.” The crunch of percussion in “Too Much” provided the foundation for layer upon layer of sound design, forming a kaleidoscope of sound swirling around the musicians. “Age of Adz” ends in an uplifting, echoing, angelic chorus of Gloria, with Stevens leading the choir in exaltation. A dance party kicked in during the twenty-minute plus version of “Impossible Soul” toward the end of the show, as people in the orchestra left their seats to groove between the rows. Earlier in the song, Stevens tipped over a snare drum and had to kick at his effects pedal to get his guitar ready for a solo so the audience was eager to show their appreciation. Balloons fell from the ceiling and hopped around as they were batted about. The carnival atmosphere continued happily until the band left the stage. Then the place rocked with applause until the encore, a full on rendition of “Chicago” -- Stevens’ beloved song from “Little Miss Sunshine.” A cartoon of the Volkswagon bus from the movie hovered above, echoing the journey taken throughout the evening.

Video off my digital camera after the party started, dancing with a camera isn't easy...


Video of the encore by PaulTSeymour who was across the room with all the balloons (lucky!)