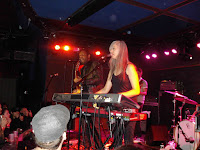 The Dears are currently on tour playing their new album live in its entirety, even passing out programs with a song list before the show. Degeneration Street, which is being released in February 2011, continues the band’s journey with another collection of full throttle indie rock songs. This Montreal band is hopelessly romantic for all the right reasons, with yearning vocals, heartfelt lyrics and a big sound that brings out the passion of the songwriting. The line up of six members (three guitars, two keyboards, drums) has changed since it was formed in 1995, but founding member/lead singer Murray Lightburn and keyboardist/background vocalist (now wife) Natalia Yanchak remain.


After treating the crowd to a choral musical intro, the band took to the stage to lead off with the new single “Omega Dog” (which is available as a download on the band’s label, Dangerbird Records). It leads off with a funky groove of heavy synth layering and a jagged guitar part, with Lightburn starting in a high falsetto before being embraced with background vocals. The song continues through a cascading swirl of chaos before returning to the theme just as it ends. This song structure is successfully employed in a few other tracks while more upbeat dance tunes that got the crowd moving. With titles such as “Blood,” “Lamentation,” and “Easy Suffering,” the band doesn’t stray from its universal theme of emotional bonds.


“You guys having a good time?” Lightburn asked. “How you liking this new shit?” The group on stage sure looked like they were enjoying themselves and audience cheered with an enthusiastic response. He mentioned that they would get to the hits “if you’re good.”


The Dears made good on the promise during the encore. Lightburn strapped on an acoustic guitar to begin the mellow introduction of “The Second Party.” Then they tore through a string of hits such as “Lost in the Plot,” “Hate Then Love,” and “Gang of Losers.” Lightburn enlisted the audience for the finale, creating male and female callbacks for “The Death of All the Romance” with the room rollicking through the line “Tell me the lies.”