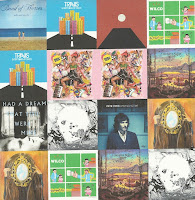 2016 ranked as another great year to be a music fan – some of my very fave bands came out with new releases (and I'm still eagerly awaiting ones from Beck and the Gorillaz!) Indie rock veterans Radiohead and Wilco continued their dominance with stellar albums worthy of multiple listening sessions. Band of Horses, Okkervil River and Pete Yorn brought a laid back twang to my year's soundtrack while Santigold and Tycho provided tracks ready for a dance party when needed. Then there's the intimacy of Hamilton Leithauser + Rostam to round out my list, along with the crowd pleasing anthems of Travis.

Give a listen on Spotify to all my Top Ten Albums of 2016 as well as Other Fave Albums of 2016, and check out my picks below with live video highlights.


1. Radiohead, A Moon Shaped Pool
Legendary English band Radiohead released its ninth studio album since 1985, A Moon Shaped Pool. The single "Burn the Witch" dropped with great fanfare as a stop-motion animated video, but it was captured live at Chicago's Lollapalooza festival over the summer. (I actually watched the online feed as it happened and highly recommend revisiting the entire set on YouTube.) It's clear that this band is still at the top of its game and we fans are lucky indeed.


2. Okkervil River, Away
When I heard "The Industry" on local radio WFUV, I was thrilled since I knew immediately it was Will Sheff's creation. Beyond his warm vocals, there was a song structure that belied the intensity of the emotional connection of lyrics and melody. This tune served as the single for Okkervil River's eighth studio album since 1998, Away, which heralds a new creative phase for the frontman with different backing members and life without his beloved grandfather. (When I caught his band at Austin City Limits Music Festival in 2013, he performed next to a framed photo of him in tribute.)

3. Band of Horses, Why Are You OK
Southern indie rockers Band of Horses released its fifth studio album since 2004, Why Are You OK, with a confident collection of songs by this tight knit quintet. Produced by Jason Lytle of Grandaddy and written by singer Ben Bridell, the songs touch on navigating life as a father to three daughters while creating music with a groupthink of incredibly talented guys who happen to really like each other, as evidenced in this video capturing the performance of the single "Casual Party."

4. Hamilton Leithauser + Rostam, I Had a Dream That You Were Mine
The collaboration between The Walkmen's frontman and soulful singer Hamilton Leithauser and Vampire Weekend's multi-instrumentalist Rostam Batmanglij, I Had a Dream That You Were Mine, was one of the best surprises of the year. This solid debut offered songs of both transcendence and foot stomping exuberance – I was able to catch a performance of the band at the Rough Trade space in Brooklyn, the perfect size to get up close and personal with the material. This bewitching tune "In a Black Out" was even tapped for a major Apple iPhone commercial, exponentially expanding the band's reach.

5. Wye Oak, Tween
Baltimore's Wye Oak created its fifth album since 2002 from remnants of songs from the past two albums, yet Tween exists just fine on its own with lush production and layered nuances that has you wondering how exactly the music is pulled off by only two band members. Jenn Wasner (vocals, guitars and bass) and Andy Stack (drums, keyboards and backup vocals) combine their talents to create original compositions that expand such sonic constraints, as witnessed in this fan footage of "If You Should See" at a recent concert.


6. Santigold, 99 Cents
Philly native Santigold (née Santi White) is the total indie pop star package, a singer and producer who also creates her costumes, dance moves and positive vibes together with social commentary in her music since 2008. Poking fun at the selfie culture, "I Can't Get Enough of Myself" from the latest album 99 Cents, is an infectious romp of fun as exhibited during this performance on the daytime television show Ellen.


7. Tycho, Epoch
Tycho is the ambient music project of San Francisco's Scott Hansen, who uses vintage-style synths and a live backing band as caught on camera at a recent KCRW session playing "Horizon." The song served as the single for the fourth album since 2002, Epoch, full of electronic experimentation without losing the musical vision of the creator.

8. Pete Yorn, Arranging Time
Pete Yorn returned to his solo career after a stint as The Olms with J.D. King, releasing a sixth album since 2000 called Arranging Time. The single "Summer Was a Day" showcased Yorn's breathy vocals and lean production, finding the perfect balance in live performance as well as the studio.


9. Wilco, Schmilco
With a wink and a nod towards Harry Nilsson's album Nilsson Schmilsson, Chicago's alternative rock band Wilco rolled out its tenth album since 1994, Schmilco.  The sweet single, "If I Ever Was a Child," is never cloying or mendacious under this band's credo and Jeff Tweedy's subtle vocal approach.

10. Travis, Everything at Once
Scottish indie rockers Travis released its eighth studio album since 1990, Everything at Once, another collection penned mostly by the frontman, singer/songwriter Fran Healy. The band's cheery optimism is on full display in this official video of "Magnificent Time" with Healy's golden vocals cheerleading the group. But I love the fan footage below it even more, showing Healy teaching the crowd in his thick brogue how to dance along, documenting the exuberance of the band and the sheer joy of being at of their shows (which I witnessed firsthand during their last tour in NYC). Gotta give it up to the audience member hanging on to that empty drink cup!