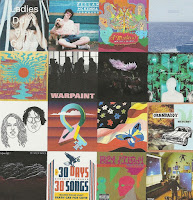 Here’s my latest listening session with a nice mix of new and established bands to update any music collection. Listen to newcomers Lo Moon, DeClan McKenna and Geowulf while checking out the latest from indie mainstays of Montreal, STRFKR, and Death Cab for Cutie. Plus returning veterans Grandaddy, The Avalanches and The Flaming Lips have all been busy in the studio, releasing songs to eager fans. All that and more on Spotify or as a YouTube playlist.

2. “Colours” – The Avalanches
Aussie electronic band The Avalanches just released its first album in sixteen years, Wildflower, with only two original members (Robbie Chater and Tony DiBlasi) since the group was formed in 1997.  “Colours” features honeyed vocals by Mercury Rev’s Jonathan Donahue who also receives a songwriting credit for the mesmerizing tune.

4. “Saltwater” – Geowulf
New beach pop duo Geowulf is the combination of Star Kendrick and Toma, who moved from their native Australia to London with sun drenched music in tow.  The dreamy single “Saltwater” is already making waves on the music scene, with plans for a full release soon.

6. “Tape Machine” – STRFKR
Portland’s indie rockers STRFKR released “Tape Machine” as the single for its fifth album, Being No One, Going Nowhere. Originally a solo project by Joshua Hodges in 2007, the band’s danceable electronica credo remains strong in this quirky new tune.

8. “Million Dollar Loan” – Death Cab for Cutie
“Million Dollar Loan” is the first song in the “30 Days 30 Songs” venture by writer Dave Eggers with new music written and recorded by artists for a Trump-Free America.  Death Cab for Cutie’s trademark sound sweetly intones the campaign moment when Trump referred to receiving such a loan from his father.

9. “Isobard” – Declan McKenna
Young English singer/songwriter Declan McKenna became a buzz-worthy artist at this year’s SXSW on the strength of his debut EP Liar, and just released this soaring single “Isobard.” McKenna is a talented musician with charismatic voice who usually performs all his own instruments.

10. “Way We Won’t” ­– Grandaddy
Californian indie rock masters Grandaddy are back after a hiatus with new material after four studio albums from 1992 to 2006. “Way We Won’t” is the endearing single to announce the end of the band’s decade-long absence.

12. “Certainty” – Temples
English psych rock quartet Temples recently dropped this catchy single “Certainty,” which will be part of the follow-up album to the band’s debut in 2014.

13. “The Castle” – The Flaming Lips
Oklahoma City’s veteran psych rockers The Flaming Lips announced that its sixteenth studio album since 1983 will drop in January 2017; it is titled Oczy Mlody (a rough translation of a Polish expression meaning eyes of the young).  Until then, this single “The Castle” provides fans something new with frontman Wayne Coyne’s floating plaintive vocals.

15. “Ambo”­ – The Album Leaf
What once was the solo music project of San Diego’s Jimmy LaValle since 1998, The Album Leaf is now a live quartet performing music from a sixth full-length album, Between Waves. The chill intentions remain mostly intact, as in the lilting tune “Ambo.”