Dale Earnhardt Jr. Jr. New Song "If You Didn't See Me (Then You Weren't On the Dance Floor)" -- NYC Tour Date April 26 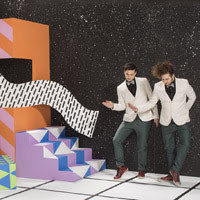 Anyone who knows me will guess why I like this song just by seeing the title -- Josh Epstein and Daniel Zott can't help but bogie while playing their instruments and harmonizing together.  Their indie power pop tunes caught my ear with 2011's It's a Corporate World, as their single "Simple Girl" played often on the KCRW airwaves.  I interviewed Epstein before a concert that fall at Bowery Ballroom (which was just cited by Rolling Stone as the top venue of "Best Clubs in America," and I have to agree, plus it's a great lesson in historic restoration. Although the Music Hall of Williamsburg would be a very close second place and Asheville's Orange Peel a close third!)  The duo ended the show with a blistering cover of "I Wanna Dance With Somebody (Who Loves Me)" in matching day glow jackets -- best tribute to Whitney Houston ever.

I actually loved the new single by Dale Earnhardt Jr. Jr. before I even learned the title.  After a dreamy intro, the dance beat kicks in and the music swirls like a disco ball.  The lyrics call out a list of things "you're supposed" to do, such as "surrender to the bass," "roll your hips in time" and "see your age rewind" (amen!) It's part of their EP, Patterns, out April 16 and will also be available in vinyl as part the offerings for this year's Record Store Day April 20th with remixes by Chad Valley and Black Amex.  Check out the tune plus a new lyric video and performance video from that Bowery Ballroom show, along with upcoming tour dates, below.