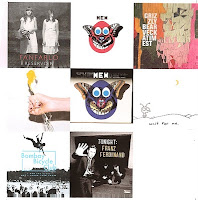 I've been trying to avoid all the Top Ten lists for music in 2009 until I had made my own. It was written down over a week ago, but today I set about searching the house and my car to find the actual CDs to make a lovely display in my kitchen like I did last year.* There's also the necessary background checks to be sure these releases actually appeared during the last twelve months. This year however, I had two candidates that only made it into my online cache of itunes and I have to admit to feeling somewhat lacking in my collection. So I'm still thinking of purchasing the actual hard copy, as I've said before there's just something about having those liner notes and background info. All said, in no particular order here's my list of CDs I thoroughly enjoyed with many plays, from the first track to the last, during 2009.

1. No More Stories.../Mew
The title is actually an entire poem which tells you mountains about the band. This Danish group stopped me in my tracks when I first heard the epic "Comforting Sounds" in 2006. Their no holds barred instrumentals and soaring vocals paint a lush world of musical escape. Crank up the volume for a fav moment in the beginning of "Introducing Palace Players" where the 7/8 rhythm crashes in a swirl of synthesizers, amazing!

2. Veckatimist/Grizzly Bear
The third release from this Brooklyn-based band is by far the most widely received -- its title is the name of a tiny island off Cape Cod near where they stayed while recording the songs. Appropriately the collection offers a dreamy seascape feel with a weighty intellectualism in the lyrics (for example, "All your useless pretentions are weighing on my time.")

3. It's Blitz!/Yeah Yeah Yeahs
Another third release from a New York City trio but different in approach as vintage synths replaced guitar parts, allowing Karen O's voice to soar without competition. She has that Chrissy Hynde strength, piercing my heart with the warmth of a woman who can rock.

4. Wait for Me/Moby
Moby's Ninth album (his Late Night is listed below as a pick for 2008) was recorded alone in his home studio and it sure sounds like it. Described as moody and melancholy, this is a deeply personal offering by an overly forthright celebrity from my home town of Darien, CT. I swear the choral beginning of "A Seated Night" sounds just like the NYC commuter train plowing through our suburban landscape while "Pale Horses" begins with the lyrics "Put me on the train, send me back to my home". Plus I love the animated videos for "Pale Horses" and "Mistake" featuring Moby's own alter ego alien creation (he used to doodle on the shopping bags while working at our local record store) known as "Little Idiot" which is also the name of his record label.

5. Tonight/Franz Ferdinand
Anyone who says there hasn't been anything worth listening to in the past decade obviously doesn't know about this band from Glasgow. They have rocked my world with three CDs filled with tightly knit danceable tunes and singalong hooks led by uber frontman Alex Kapranos. This latest release is similar to Moby's Last Night with its homage to all things nightlife, gamely inviting the listener along for the ride.

6. Art Brut vs. Satan/Art Brut
When I first heard this U.K. group Art Brut about five years ago, I found them cute and fun with frontman Eddie Argos shouting lyrics such as "Formed a band, we formed a band!" But I never thought they'd last the wave into three strong CDs -- this one kicking each other with "Alcoholics Unanimous" and then my own contemporaries with "The Replacements" (lamenting how could they have just discovered that 80s band since "some of them are as old as my parents!")

7. Wolfgang Amadeus Phoenix/Phoenix
Only a band who grew up together in Versailles could name their CD with the name of a classical icon and get away from it. This is the group's fourth release with more than a few keepers, from the beginning intro beats of "Napoleon Says" and "1901" to the killer hook of "Lisztomani" -- Thomas Mars vocals are confidently splayed across the tightly knit group.

8. Kingdom of Rust/Doves
This is another band with deep roots though traced back to teen years outside of London. While this fourth offering by the trio isn't my favorite, their distinct sound of lush instrumentation and romanticized vocals always makes for interesting listening. Plus their lyrics pull me along positively transfixed to their world across the pond (n.b. the lyrics "an english skyline falls down to the future but no one noticed in this empire.")

9. Reservoir/Fanfarlo
The first release from this London-based band was recorded at Tarquin Studios in nearby Bridgeport, CT. (Interpol,The National and Mates of State have also recorded there.) This six member group is part Arcade Fire, part Ra Ra Riot or Beruit with its use of mandolin, violins and trumpets along with the usual band line up of drums/guitars -- worth more than a few listens.

10. I Had the Blues But Shook Them Loose/Bombay Bicycle Club
This debut album by a young U.K. band instantly had me after hearing the single "Always Like This" with its bouncy backbone and overflow of harmonies at the chorus. Loads of potential here, looking forward to a long shelf life with this band!