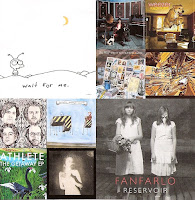 Found this one on Alt Nation driving my husband's car w/Sirius radio. I couldn't believe the unabashed 80s sound, reveling in it really! This American band from Cambridge, MA call themselves 'electronic' with their love of synths, why not.

2. Dominos - The Big Pink
With cringe-worth lyrics this song stays i my head and won't let go. One of the members produced The Klaxons at his own record label so there's the catchy tune reference.

5. Pale Horses - Moby
6. Division - Moby
This new CD from my homie Moby (he grew up in the Big D of Darien before calling himself a New Yorker) was hailed for it's introspective nature but it still has some funky grooves to please the dance crowd. Had a hard time wittlling down the songs listed!

9. Harold T. Wilkins - Fanfarlo
10. The Walls Are Coming Coming Down - Fanfarlo
My fave new band (meaning I bought their entire release and enjoy it often) though sometimes they plod along with way too much going on -- it's always interesting at least. Had to throw a few tunes on the list...

11. (If You're Wondering If I want You To) I Want You To - Weezer
The first single off the new Weezer release, blasting another romp that is still irresistable. Holding out for the rest of the CD that'll be under the tree with the Weezer snugglie and with the band going off a cliff in their tour bus traveling icy roads recently, I'm ever the more thankful for the new release.

14. The Right - Lou Barlow
I actually remember his Sebadoh band in the 90s -- BUYING A CD to be able to hear a fav song of the time. He's also a member of Dinasaur Jr. Like the easy feel of this track, sticks with you.

15. Say Please - Monsters of Folk
Proclaimed as and American 'Supergroup' with Jim James of My Morning Jacket bleating out the vocals, this song rocks along nicely.

16. His Master's Voice/Monsters of Folk
Another track to indulge in and contemplate the lyrics as well.

18. The Getaway (U.S. Radio Mix) - Athlete
Looked hard for a track I liked on their new release since this band is usually too accessible in taste. But you gotta like how the band has been friends since 14 as I can imagine the band that practiced in my basement might travel the same course!
Posted by JaneJS at 9:30 PM
Email ThisBlogThis!Share to TwitterShare to FacebookShare to Pinterest
Labels: Athlete, Fanfarlo, Julian Casablancas, Lou Barlow, Moby, Monsters of Folk, Passion Pit, Sea Wolf, The Big Pink, Weezer
Newer Post Older Post Home