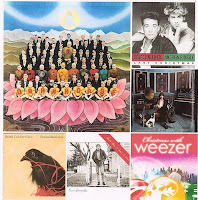 I haven't wrapped one gift and the house guests are arriving soon but here I am fiddling with another playlist. I'm calling it 'HIP HOLIDAY' but it's really what I thought was hip through the decades put together into a cohesive listening session. I enjoy driving around during the holiday season to the classic collection of holiday tunes on a few presets in my car -- especially the boozy renditions by Dean Martin and anything secular by Frank Sinatra. But there's a lack of that second tier of more interesting, dare I say contemporary (well since the invention of Rock 'N Roll) on these radio stations beyond racking my brain to remember who's singing what in "Do They Know It's Christmas." So I made my own from my vast collection of holiday tunes and offer it up as a gift to others, merry merry!

1. Christmas is a Time to Say I Love You - Billy Squier
In the age of auto tune and perfect percussion, this raucous party tune just makes me happy. Yes it's cheesy as can be, the song rambles along until we're all in the room singing along. Another holiday indulgence.

2. Ding Dong Ding Dong - George Harrison
Raspy and emotional vocals from the Dark Horse days, George manages to bring a rockin tune that invites us all to sing along. I've put together a fab four holiday tour here as listening to the Beatles Christmas album is a family tradition (a memento of my husband's he received when joining the fan club!)

3. Wonderful Christmastime - Paul McCartney
This song reminds me of how Paul is such a family man -- I can just imagine him sitting with other parents enjoying the children's choir with a few of his own in the crowd.

4. White Christmas - Ringo Starr
Like "Octopus's Garden," this holiday classic is at once totally accessible and unusual with its use of reggae rhythm. As always, Ringo's confident vocals brings a bright lightness to it all.

6. Father Christmas - The Kinks
A rocking tune telling the sad story of a department store Santa beaten up by kids who call toys 'silly' and reminds us that Rock 'N Roll even loves the thugs.

7. Peace On Earth/Little Drummer Boy - David Bowie & Bing Crosby
Released during my David Bowie immersion -- don't remember ever seeing the video back then but viewing it today has David looking indeed a man who fell to earth, an angelic alien singing sweetly without hardly acknowledging the dumbfounded Bing next to him.

8. Santa Claus Is Comin' to Town - Bruce Springsteen
Went through a Boss phase in the mid 70s with 'Born to Run' with every one else and just can't resist another call to party -- just love when he asks if the band has been good!

9. Christmas Wrapping - Waitresses
This song instantly takes me back to wearing leggings and floppy bows in my hair -- the smart single gal lyrics keep the happy hook cranking.

10. Last Christmas - Wham!
Yes, forgive me but the synths rev up and I'm back in the 80s again with no regrets.

11. Chrismas (Baby Please Come Home) - U2
Bono plays Elvis then dials up the tenor to 11 with almost religious abandonment.

13. Merry Christmas Baby - Hanson
Apologies again, but these bros rocked it when this came out. Actually enjoyed having their posters all over my daughter's walls, adorable that they were. My husband fanagled entrance to see them do this song warming up for their SNL gig -- I was just excited to be sitting with Caroline Kennedy with her kids!

14. The Christmas Song - Weezer
This is on a TRL Christmas compilation back when that show owned MTV. Classic Weezer in its approach with harmonies floating over a rockin groove -- another relationship down the drain, only Rivers can make something like that ROCK.

15. We Wish You a Merry little Christmas - Weezer
Couldn't resist putting a second Weezer one the list. This is part of a short list released on itunes last year but the rest are oddly religious choices. Love how they shout "I won't go" just like how I'd sing it as a kid.

16. Winter Wonderland - Phantom Planet
A fav band takes a lilting approach to a classic -- lovely little tune that gives us a chance to rock out before indulging in windy sound effects.

17. Have Yourself a merry little Christmas - Local H
Hadn't even heard of this band except this song found on A Rock 'N Roll Christmas II, love the Nirvana soft to loud rock out mode.

18. I Wish It Was Christmas Today -Julian Casablancas
I had to buy the entire CD on itunes to get this song (otherwise I'd be content with a few selections). It gives a Strokes-ish kick to the holiday season even though this is off the frontman's new solo release.

18. The New Year - Death Cab For Cutie
All optimissm and sing songy, a fitting ending to a holiday list, as we all ahead to a clean slate a new year brings.
Posted by JaneJS at 8:16 PM
Email ThisBlogThis!Share to TwitterShare to FacebookShare to Pinterest
Labels: Holiday Playlist
Newer Post Older Post Home