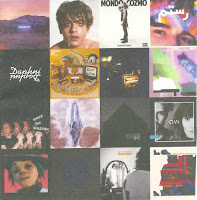 Now that summer is in full swing, here’s another compilation of new tunes curated into a personal listening session.  There are singles from anticipated albums by Arcade Fire, The National, and Grizzly Bear, along with Mondo Cozmo, The War on Drugs and Rostam’s debut. Stand alone songs by Alex Ebert, Declan McKenna and liv round out the list with unreleased music by Gorillaz, Beach House and Daphni plus more. Listen on Spotify or as a YouTube Playlist.

1. “Everything Now” – Arcade Fire
“Everything Now” is a swirling, musical ride and title track for the upcoming fifth studio album since 2001 by North American indie juggernaut Arcade Fire. While lyrically skewering materialism, the band seems eager to dance with the help of co-producer Thomas Bangalter of Daft Punk.

2. “The System Only Dreams in Total Darkness” – The National
“The System Only Dreams in Total Darkness” serves as a vigorous reintroduction to The National, the indie rock band from Cincinnati formed in 1999.  This is the first single for Sleep Well Beast, the seventh studio album from the group. Guitarist twins Aaron and Bryce Dessner develop the musical structure for each song, then singer Matt Berninger adds a melody and lyrics to fit the composition, as the creative collaboration continues.

3. “Automatic” – Mondo Cozmo
Mondo Cozmo, a.k.a. Josh Ostander, is ready to release his debut album in August, Plastic Soul. “Automatic” features his gritty vocals and rock anthem leanings, that have quickly found a solid fan base for this new musical project (during the 2017 tour the backing band is Illinois).

6. “Three Rings” – Grizzly Bear
“Three Rings” is the first single from Painted Ruins, the fifth album since 2002 by indie quartet Grizzly Bear, which is due in August. The group is now split between coasts, so recording took place in both NYC and LA studios using the usual mix of traditional and electronic instruments for this elegant soundscape.

7. “Broken Record” – Alex Ebert
L.A. based singer/songwriter Alex Ebert is best known as the frontman of Edward Sharpe and the Magnetic Zeros and Ima Robot. His distinctive vocals highlight the jumpy flow of “Broken Record,” a single for the follow up to his solo debut, 2011’s Alexander.

8. “Chariot” – Beach House
The sumptuous opening organ chords and majestic singing in “Chariot” herald a new Beach House song on a compilation album of unreleased cuts and one other new song, B-Sides and Rarities.  Baltimore duo Victoria Legrand (vocalist/organist) and Alex Scally (guitarist) decided to release every song that did not exist on an album elsewhere for the band’s dedicated fans.

9. “Humongous” – Declan McKenna
Young English singer/songwriter Declan McKenna is ready to release his debut album, What Do You Think About the Car? “Humongous” is yet another solid pop single from the collection.  After a breakout year in 2016, McKenna is now confidently playing festivals.

10. “Ultralife” ­– Oh Wonder
Josephine Vander Gucht and Anthony West record as Oh Wonder, a London based alt-pop duo. “Ultralife” is the title track to their second album since 2014, a melodic romp sweetened by synth riffs.

11. “Bike Dream” – Rostam
Multi-instrumentalist Rostam Batmanglij will soon release a debut solo album after years with Vampire Weekend and collaborating with Hamilton Leithauser, among others. The single “Bike Dream” is a sweet tune that genuinely expresses joy over life’s little moments.

13. “Tin” – Daphni
Canadian electronic mastermind Dan Snaith (who also records under Caribou) returns to his Daphni alter ego for another album since 2012 of unreleased tracks. The dance music whirl of “Tin” fits in with the title, fabriclive93, which honors the venerable London nightclub.

15. “Holding On”­ – The War on Drugs
“Holding On” is the second single for the fourth album since 2005, A Deeper Understanding, by Philly band The War on Drugs due out in August. Adam Granduciel’s gritty singing and guitar wailing is the backbone for the group’s sumptuous, expansive sound.

16. “Sleeping Powder” – Gorillaz
This previously unreleased track seems more emblematic of this U.K. cartoon band, with its cheeky harpsichord intro and melodious dance spin with synths galore. “Sleeping Powder” is reportedly one of over 40 unused songs from the group’s fifth album since 2001, last year’s Humanz, so fans can hope for many more singles ahead.