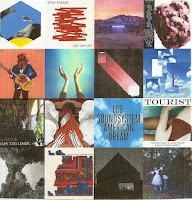 While we are still waiting for the much-heralded Beck album due in a few weeks, I can’t complain. The past few months brought new music from some of my very fave bands sounding as strong as ever: Arcade Fire, LCD Soundsystem and The National. So enjoy this playlist featuring songs from these and other recent releases as we transition to fall. Listen on Spotify or as a YouTube Playlist.

1. “Dear Life” – Beck
Another single appeared as Beck readies to release his 13th studio album since 1985 next month. With a jaunty piano intro, “Dear Life” brings another genre stew with guitar swagger and lyrical darkness as he mixes up the sentiment, “Dear life, I’m holding on,” for the howling chorus.

2. “tonite” – LCD Soundsystem
James Murphy finally returns to the music that most inspires him after producing other bands and various creative projects: his own. (And it turns out David Bowie had a hand in this eventual return after seven years!) The fourth album since 2002, American Dream heralds the band’s first number one album but better yet, it comprises all the sonic trademarks expected from LCD, from low reverberating synths, pulsating percussion layers and Murphy’s speak-sing rattling off random thoughts, as found in the song “tonite.”

3. “Put Your Money on Me” – Arcade Fire
“Put Your Money on Me” is perhaps my favorite track on the fifth Arcade Fire album since 2001, Everything Now. The slow build with alternating male/female vocals recalls the romantic push and pull of “It’s Never Over (Oh Orpheus)” from the last album, which was presented live as Win Butler and Régine Chassagne sang longingly to each other across the crowd during the last tour in Montreal to great effect.

4. “You Push, I’ll Go (feat. Alex Sanchez)” – Baby Dayliner
A favorite play on KEXP’s “John in the Morning Show,” this cult hit by Baby Dayliner (the stage name of NYC native Ethan Marunas) has finally attained an official release on an EP of the same name, after two albums over a decade ago. The infectious tune “You Push, I’ll Go” follows city dwellers on a night out, vowing to keep the faith in modern life.

5. “Offering” – Cults
NYC indie pop duo Cults is getting ready to release its third album since 2010, with this title track “Offering” serving as a teaser single. The lush instrumentation by Brian Oblivion under sweet youthful vocals by Madeline Follin find their confident musical stride.

6. “Don’t Delete the Kisses” – Wolf Alice
A four piece alt rock band from North London, Wolf Alice pulls away from punk to offer a tender love song, “Don’t Delete the Kisses,” a single for the upcoming sophomore album since 2010, Visions of a Life. The band embraces standard pop sensibilities with a synth heavy take to conjure up images of modern romance, as sung in hushed whispers by Ellie Rowsell.

7. “Airbourne” – Cut Copy
When any band is formed by a DJ, it usually leans heavily into dance music, as with Australian band Cut Copy. “Airbourne,” this quirky party song bubbling with electronics, is off the fifth album since 2001, Haiku from Zero.

9. “Valley Boy” – Wolf Parade
Canadian indie rock band Wolf Parade will release its fourth studio album since 2003 (after a hiatus from 2011 to 2016).  You'd never know the band was on hiatus for five years by this swaggering single and title track “Valley Boy” with Dan Boeckner’s gritty yet soulful vocals.

13. “Call It Dreaming” – Iron & Wine
Iron & Wine is the musical project of South Carolinian Samuel Ervin Beam. His sixth full-length album since 2002, The Beast Epic, continues the acoustic aesthetic with his signature sweet soft vocals, this time about themes of time and aging.

14. “Guilty Party” – The National
Indie rock quintet from Cincinnati, Ohio, The National just released Sleep Well Beast, its seventh album since 1999.  “Guilty Party” offers a tender side of the band, although complexity reigns underneath the introspective lyrics as conveyed by singer Matt Berninger.

16. “Planet” – Four Tet
Four Tet is the stage name for Kiernan Hebden, an English musician who also considers himself in the post-rock genre. This stand alone single “Planet” flaunts his wide range of influences, with a world view of instrumentation and vocal pairings.