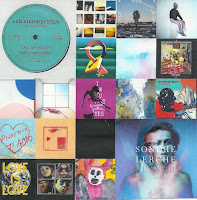 Ready to kick off the warm weather season with another soundtrack of new tunes bookended with the much anticipated Gorillaz album and LCD Soundsystem singles? There are teaser singles by Phoenix, Broken Social Scene and Local Natives, plus a debut by baby band Hoops. Chill out to instrumentals by The Octopus Project, Geotic and Poolside while Sondre Lerche’s crooning sets a summery mood. The political scene also brought a bevy of emotionally charged music, represented by Woods and Toro y Moi. Listen on Spotify or as a YouTubePlaylist.

1. “Andromeda (featuring D.R.A.M.)” – Gorillaz
After six years, the ageless cartoon façade of the U.K. band Gorillaz (animated by Jamie Hewitt) is rejuvenated yet again by the musical vision of Blur’s Damon Albarn with the fifth studio album since 1998, Humanz. “Andromeda” takes its name from an 80s nightclub, represented in synth swirls and positive dance energy, with some ad libbing and vocal harmonies by D.R.A.M.

2. “Halfway Home” – Broken Social Scene
Toronto collaborative Broken Social Scene is working on its first album since 2010, (its fifth since 1999) with this single “Halfway Home” heralding the return of the band’s signature choral onslaught and thick instrumental arrangements. Thirteen musicians are credited for this song “Halfway Home,” as members of associated acts such as Stars and Metric contribute their talents.

3. “J-Boy” – Phoenix
French quartet electro pop band Phoenix will soon release its sixth album since 1999, Ti-Amo. “J-Boy” is essentially a dark love song, but the zap of synthesizers quickly turns it all into escapist dance music in the best possibly way.

4. “Oh the Saviour” – Temples
English psych rock quartet Temples is back with a self-produced second album since 2012, Volcano, after recording sessions at the band’s own studio. The gritty garage sound blends storytelling vocals that build into a cascading chorus.

5. “On Top” – Hoops
Indiana quartet Hoops is ready with a full length album after forming in 2014, taking the name from greenhouse structures where frontman Drew Auscherman worked. The single “On Top” boasts melodic guitar lines and intricate drum patterns with an easygoing vibe.

6. “Everything Goes (Instrumental)” – Poolside
L.A.’s best-named duo Poolside (Danish producer, DJ and multi-instrumentalist Filip Nikolic plus San Fran DJ Jeffrey Paradise) dropped this stand-alone single without the clutter of vocals for a blissful take of unabashed sunny synths.  The two have but one album and one EP since forming in 2010, but countless singles, mixtapes and remixes.

7. “Actually Smiling” – Geotic
L.A. native Will Wiesenfeld is a classically trained musician who creates electronic music as Baths and Geotic, which he explains is for more passive listening. The tenth album since 2008, Abysma, features the smooth soundscape “Actually Smiling.”

8. “Disco Kid” – Chaz Bundick Meets the Mattson 2
South Carolina native and CA transplant Chaz Bundick (a.k.a. Toro y Moi) has yet another side venture with the Californian twin-brother jazz duo, The Mattson 2. The jamming riff of guitars and crazed keyboards brings out a boldly animated side of this chillwave musician.

12. “I Saw You Close Your Eyes” – Local Natives
L.A. indie rock band Local Natives are currently on tour supporting the 2016 album Sunlit Youth, but teased a single imploring fans to unplug and listen to the new song with eyes closed. (The website closeyoureyes.net played the music only after a webcam detected this action.) The swaying melody “I Saw You Close Your Eyes” also serves as a live concert highlight as fans sing along to the new tune.

13. “Omaha” – Toro y Moi
Chaz Bundick contributed a new song as Toro y Moi to Our First 100 Days, a musical fundraising project benefiting advocacy groups (such as People’s Climate Movement, Southerners New Ground and All Above All) in protest to the Trump administration. The laid-back groove of vocals over vintage synths and funky bass line provide a nice tonic against this new era of political strife.

14. “Same Dark Places”­ – JR JR
Detroit indie-pop band JR JR glosses over dark lyrical content with the upbeat single “Same Dark Places,” complete with horns and strings to buoy the composition (it was also picked for the Neflix series about teen suicide, “13 Reasons Why”). The songwriting team of Josh Epstein and Daniel Zott has three albums of infectious songs since 2010.

15. “This Song” – RAC, Rostam
Andre Allen Anjos has created music as RAC for ten years, with “This Song” celebrating how it all began back in his dorm room. This collaboration enlists the honeyed vocals of Rostam Batmanglij, a former member of Vampire Weekend now known as Rostam.

17. “Thinking of a Place”  – The War on Drugs
This epic single provided a special vinyl collectible for fans on this year's Record Store Day and heralded the upcoming fourth album since 2005 by Philly’s indie rock band The War on Drugs. At over ten minutes, “Thinking of a Place” concentrates our attention on the languid guitar and unique vocal stylings of frontman Adam Granduciel.

18. "call the police" – LCD Soundsystem
Hit the dance floor again with the Brooklyn band that broke up then didn't, as LCD Soundsystem released two singles in advance of the fourth album since 2002 expected this year. "call the police" follows the winning of formula in so many soaring LCD anthems of the past, from blasting synth chords and disco ball beats to the layered harmonies lead by mastermind James Murphy.