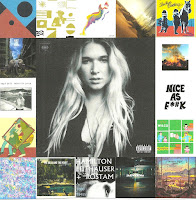 I certainly did not think I’d be posting another playlist so soon. But the surprise album by new band Nice as Fuck and a new collaboration between Hamilton Leithauser and Rostam Batmanglij plus singles galore (Woods, Wilco, Jagwar Ma, Allah-las, The Head and the Heart, Father John Misty, and more) filled my inbox and online radio listening sources, so here we go again!  There are also releases from veterans The Avett Brothers and Fruit Bats to keep the summer soundtrack chill, along with some solid electronica from Mark Pritchard to zone out on a hot day. Listen on Spotify or as a YouTube playlist.

1. “In These Fine Times” – Classixx (featuring De Lux)
Production and DJ duo Michael David and Tyler Blake enlisted fellow L.A. musician Sean Guerin of De Lux to double the vocals for this breezy tune. It is off the band’s second album of electronica since 2008, Faraway Reach.

2. “O B 1” – Jagwar Ma
Australian trio Jagwar Ma are getting ready to release a follow up album since its debut in 2013, Every Now & Then. This stellar psychedelic dance rock single includes drums by Warpaint’s Stella Mozgawa.

3. “Could Be You” – Allah-Las
L.A. based surf rock revivalists Allah-Las are back with “Could Be You,” a teaser single for its third album, Calico Review.  The tune is full of signature harmonies and fuzzed out guitar, along with new additional instruments to expand the sound: viola, harpsichord and theremin.

4. “Door” – Nice as Fuck
Jenny Lewis’s latest band with Erika Forster (Savoir Adore) and Tennessee Thomas (The Like) dropped a surprise album of smirk-inducing catchy tunes such as “door.” The self-titled LP comes complete with a theme song for the new group.

6. “They Want More” – Ages and Ages
Portland based sextet Ages and Ages just recorded a third album since 2009 at Ice Cream Party Studio, owned by Modest Mouse’s Isaac Brock (he also wielded a guitar on another track). The single “They Want More” confronts commercialism with a infectious melody and trademark sing along chorus.

7. “Know Your Minute” – Woods
“Know Your Minute” is a limited edition, tour-only 7” and digital download single by this Brooklyn folk rock band formed in 2005. Led by laid-back vocals of guitarist Jeremy Earl, Woods continues on its own path of quirky Americana.

8. “If I Ever Was a Child” – Wilco
Chicago’s resident indie juggernaut Wilco has another album ready less than a year since Star Wars. The tenth LP since 1994 is called Schmilco (with a nod to Harry Nilsson’s Nilsson Schmilsson) and this single shows the softer side of the band, led by Jeff Tweedy’s melancholy vocals.

13. “The Industry” – Okkervil River
Brooklyn-based Will Sheff of Okkervil River has been working on another album with a different band configuration with songs about moving on and finding new beginnings. “The Industry” is the single for the eighth collection since 1998, Away, conveyed by Sheff’s original yearning vocals.

16. “Division” – Tycho
San Francisco-based ambient musician Scott Hanson, performing under the stage name Tycho, released this fluid single with the intention of another full album in the future, the fifth since 2002.  His music encompasses both lo-fi analog equipment and a futuristic electronica style, completely mesmerizing at the same time.