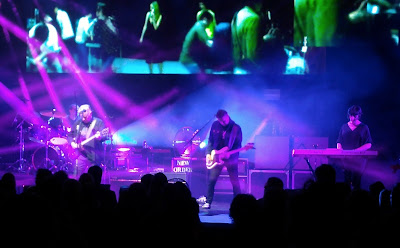 U.K. legends New Order will always have a special place in my musical collection, with appearances on past Romantic Songs for Valentine's Day (2014 and 2016) and the soundtrack of dancing in NYC clubs back in the 80s, but I'd never seen them live. With a new album last fall, Music Complete, the group planned a six-night American tour to support the new songs and refresh memories of the older ones.

With the majestic Radio City Music Hall filled to the brim, the band began confidently with a new song, "Singularity." While this material doesn't deviate much from the dance music formula from decades ago (chunky bass lines and soaring melodies galore as sung by 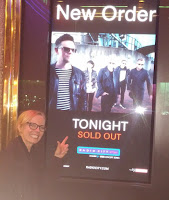 Bernard Sumner along side half the original band members), it was clearly the older tunes that the crowd was waiting for to dance and sing along.  "Temptation," "Ceremony," "Bizarre Love Triangle" and "Age of Consent" were all rolled out, along with "You Silent Face," the composition that Moby has remarked how it proved electronic music could be beautiful in its own right. (For a refresher, listen to my New Order Faves playlist on Spotify.) The busy projections behind the musicians competed with the audience attention, but acoustically there could be no complaints -- the sound was perfectly supplemented by plenty of prerecorded tracks.

The encore was shortened from two songs to only one with a strict curfew at the venue (surely someone could have done the math?) Without time for the mega-hit "Blue Monday," the Joy Division song "Love Will Tear Us Apart" was still a fitting tribute to the genesis of the music -- starting over after the suicide of vocalist Ian Curtis -- as the words JOY DIVISION FOREVER drew huge cheers. Check out the video for the song on YouTube or here, still echoing in my heart. And my PopMatters pal Sachyn Mital took some awesome photos of the night, link here.