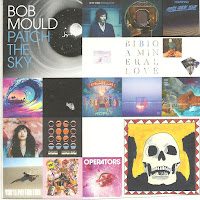 Since I recently learned that March 1st is the meteorological start of spring, I won’t hesitate to share this playlist as the official one for the next season. Besides, there are plenty of new albums to check out – from faves like Santigold, Peter Yorn, Wild Nothing and Bibio to new bands such as James Supercave and Bob Moses. And check out teaser singles from upcoming releases by Andrew Bird, Bear Hands, Caveman, The Boxer Rebellion and Woods.  Listen via Spotify or as a YouTube playlist.

1. “Can’t Get Enough of Myself” – Santigold
Santigold is the stage name of Santi White, a Philly singer and producer whose artistry extends into costumes and choreography for her live shows. This bouncy pop single lambasting our self-absorbed culture is off her third studio album since 2003, 99¢.

2. “Burn” – James Supercave
L.A. trio James Supercave recorded its debut album Better Strange, with a solid psych-pop credo. According to singer Joaquin Pastor, this song “Burn” was “born from a bass line and wants to suck you in.” Done.

4. “Hour” – Porches
Porches is the musical project of Aaron Maine, who has released a second album called Pool after four years on the scene. “Hour” is a lush synth reverie with sweet backing vocals by his life partner, Frankie Cosmos.

5. “Never Ever” – STRFKR
Portland’s indie rock band STRFKR has released this stand-alone single, “Never Ever,” with a trademark danceable groove.  The group is gearing up for a fifth album since the band formed in 2007.

6. “Feeling” – Bibio
Bibio, a.k.a. Stephen Wilkinson, is an English music producer with a love for mixing new and retro sounds with gusto. He just released his eighth studio album since 2005, A Mineral Love.

7. “Tearing Me Up” – Bob Moses
Bob Moses is an electronic duo from Vancouver but now based in Brooklyn.  Singer/songwriter Tom Howie and Berlin-style techno geek Jimmy Vallance joined their skills for a post-club aesthetic, creating pop melodies over cool house music.

8. “Capsized” – Andrew Bird
Chicago’s prolific songwriter and multi-instrumentalist Andrew Bird will soon release his thirteenth album since 1996, Are You Serious. The single “Capsized” serves as the opening track with a typical timeless musicality but more personal lyrics that open up about marriage and parenthood.

9. “To Know You” – Wild Nothing
Virginia based musician Jack Tatum steps out of the bedroom recordings vibe for his third studio album since 2009 as Wild Nothing, Life of Pause. Tatum admits “there’s a different kind of ‘self’ this time around,” by using a full band in production and it shows.

10. “Voices in My Head” – Bob Mould
San Francisco alt rocker Bob Mould (best known as the vocalist for Hüsker Dü and Sugar) is ready with his twelfth solo album since 1989, Patch the Sky. He confidently returns with a straightforward, storytelling style in “Voices in My Head.”

11. “2AM” – Bear Hands
Brooklyn’s raucous indie rock quartet Bear Hands will release its third album since 2006, You’ll Pay for This. The catchy tune “2AM” extols the world of late night partying with a tongue-in-cheek wit.

13. “Never Going Back” – Caveman
The sweeping composition “Never Going Back,” serves as the first single from the upcoming album by Brooklyn indie rock/pop quintet Caveman. It is the band’s third release since 2010, called Otero War.

16. “Exit 353” – Damien Jurado
Seattle’s indie rock singer/songwriter Damien Jurado will release the final album of a trilogy, Visions of Us on the Land. This is Jurado’s twelfth album since 1995, and the majestic song “Exit 353” revolves around the character being left behind on a vacant earth.

17. I’m Not the One” – Pete Yorn
New Jersey raised now L.A. based singer/songwriter Pete Yorn is ready with his seventh solo album since 2010, Arranging Time. After The Olms side project, Yorn returns to his roots – an outpouring of personal emotions as evidenced in “I’m Not the One.”