Unearthed Gem of a Song: "Life's What You Make It" By Talk Talk 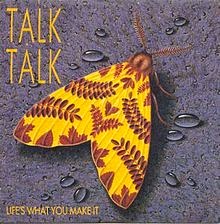 This pick, "Life's What You Make It" by English new wave band Talk Talk, appeared on my radar again thanks to a daily listening habit of "John In the Morning" on KEXP.  As music instantly does, hearing it again took me right back to the 80s when my life stretched out ahead and decisions demanded some sort of path.  From the thumping bass line to singer Mark Hollis' undulating, emotional vocals, the tune is a good reminder that life is indeed what you make it -- wherever you are on your own personal road.  Talk Talk's other big hit also took on the big picture, extolling individual purpose with "It's My Life." It was revisited with great success by No Doubt in 2003 (video here) and I was glad to hear it enjoy a second life, while also having another reason to delve into the original.

This video for "Life's What You Make It" has the band at their instruments, with floppy hair and wearing what is now considered Mom jeans. Since they were essentially trio for a decade (from 1981 to 1991), I suppose I'll forgive them for not inviting a guitar player for those epic hooks or anyone else to trigger those luscious synth layers that were so emblematic of the 80s. The song was the single for Talk Talk's third album, The Colour of Spring, from 1986.

Set the time machine and enjoy the video on YouTube or below!

Posted by JaneJS at 9:29 AM
Email ThisBlogThis!Share to TwitterShare to FacebookShare to Pinterest
Labels: John in the Morning, KEXP, Mark Hollis, No Doubt, Talk Talk
Newer Post Older Post Home