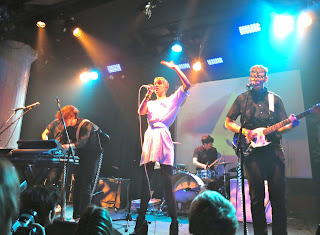 I remember hearing the single "Psychic City" on KCRW years ago and loving it immediately.  That voice, the funky beat, and those snarky lyrics about everyday appliances coming alive to party with an immediate sing along, Aye-eye-eye-eye!  It found a spot on one of my new music playlists and I've been a fan ever since.  Having missed them at Moogfest in October (a flight from Mexico City was cancelled), I went on their website and found an upcoming gig in NYC, one of the many perks of living in the area...

YACHT defines itself as a “band, belief system and business,” with a corporate logo known as a smilangle (a smiley face inside a triangle).  They are currently composing some of the most danceable music today, recently releasing a new album, Shangri-La, last June. Songs from the album filled most of the set list at Santos Party House, with room for 2008’s single “Summer Song,” 2009’s “Afterlife,” along with “Ring the Bell.”  Plus their dance hit “Psychic City” provided a suitable encore.  Jona Bechtolt, mastermind for the group since its inception, took the stage with the rest of the band all wearing black before singer Clare L. Evans followed dressed in a white dress.  With her cropped white hair and dramatic eye makeup, her stylized movements brought an additional element of theatre to the live concert.  Bechtoit bounced from keyboards to guitar and singing into a mike, while Evans commanded the audience to get their groove on. 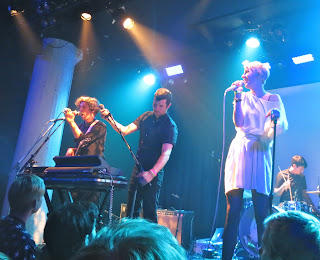 Everything sounded great and the band was clearly enjoying themselves playing their part, communicating through the pop hooks and layered beats of “Beam Me Up,” “One Step, and “Utopia.”  The group covered like-minded band, The B-52s, for a wound-up “Mesopotamia” and Bechtoit took over the drum kit for “Dystopia (The Earth is on Fire).  However, the show wasn’t just about creating a live soundtrack for their fans to let loose and boogie.  Early on, there was a PowerPoint presentation outlining three stages for audience participation during the evening: 1) preparation, 2) initiation and 3) enlightenment.  A slide show was also utilized to introduce band members (along with their nicknames and astrological signs) and included a map where the group was from (a Western American Utopian Triangle formed by linking Los Angeles, Marfa, Texas and Portland, Oregon).  During a Q & A session between songs, Evans was asked if she could be someone’s girlfriend.  She replied, “Yes, spiritually and metaphysically.”  Another question posed queried about her favorite food and orifice to which she responded, “avocado and sinus.”  For the last song, Evans invited some young, front row fans up on stage to dance with her and everyone was invited to say hello at the merch table afterwards. The overzealous security there had to get a bit physical to break up the line waiting there and Evans was clearly disturbed by it, saying sweetly,"they're being so mean."

YACHT takes its name from an alternative school that Bechtoit was enrolled in for a bit, an acronym for “Young Americans Challenging High Technology.”  He met Evans soon thereafter, but she didn’t join the band full time until 2008.  It’s a match made in electropop music heaven. She’s also a science nerd who pens a popular blog, “Universe,” about the intersection of art and science.  The universal messaging of “Afterlife” speaks to the sun, moon and the light that “makes most of life.”  Yet it quickly turns to a tongue-in-cheek statement about the band’s core beliefs in putting the party first. 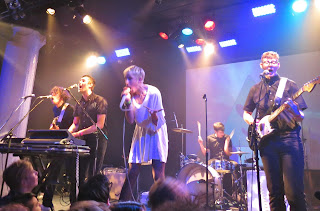 If my friends were a crowd,
It might not be the biggest
But it’d be definitely loud