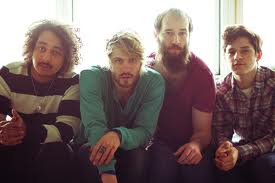 During a recent interview with PopMatters, Motopony’s frontman Daniel Blue promised how their live show takes the music to next level.  His band made good on this promise at Mercury Lounge on September 15, where Blue could strut his stuff on stage and the instrumentation came alive despite a sub par sound system.  Buddy Ross was in command at the keyboards as the mastermind behind the production of their self-titled debut along with a few new entries during the set.

From the moment Blue introduced this Seattle band with his unbuttoned shirt and tousled hair, every composition was another opportunity to communicate with the crowd.  He is a poet, so lyrics are words with meaning behind them. His gestures helped to tell the story as well as flat out sell each song.  Blue also is quite a dancer, getting into the groove from the first song, appropriately named “Get Down.”  Quieter songs such as “June” and “God Damn Girl” allowed Blue to croon softly at the microphone with audience members singing along. However, it was two tunes getting the most airplay that really got the fans moving: the jaunty “King of Diamonds” and the folk rock explosion of “Seer,” a perfect pick for their final song.