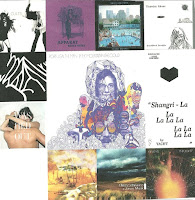 It always seems that just as you’re trying to get in some final seasonal fun during the last weekends of summer, the weather turns in sheer mockery of such a plan.  Add in a rare earthquake plus a nasty hurricane here on the East coast in the same week, and you can’t blame me for wanting to call this playlist Late Summer 2011.  After all, the official start of autumn isn’t until September 23rd this year. With thoughts of calmer skies and more warm days ahead, I offer another compilation of new music to enjoy.  From German electro to laid back bands from the Northwest and some new chill wave, recent releases are featured in a streamlined listening session with notes below. Link to listen here!

1. “Up Up Up” - Givers
This infectious indie pop tune is the single off the Givers’ first release, In Light.  The quintet from Lafayette, Louisiana met during high school and college to form a band which made this year’s hot list at SXSW.

2. “2 Hearts” – Digitalism
Digitalism is an electro pop duo from Hamburg, Germany who just released their second collaboration, I Love You Dude.  The pair, Jens “Jence” Moelle and Ismail “Isi” Tüfekçi, formed a friendship from hanging out at a local record store and are now known worldwide for their remixes as well as their own dance music.

3. “Puzzle Pieces” – Saint Motel
“Puzzle Pieces” is a rollicking single by this indie pop quartet from L.A., where it was on heavy rotation even before it was released in May.  The additional production value with horns and percussion only adds to the over the top giddiness of the track.

4. “Go Outside” – Cults
5. “Abducted” – Cults
Brian Oblivion and Madeline Follin formed Cults as NYU students just last year, writing for themselves and playing for friends. These two confident tracks are off their self-titled release, which is making ‘best of’ lists already.

6. “Bury Me Standing” – Handsome Furs
7. “Repatriated” – Handsome Furs
Handsome Furs is a husband and wife team from Montreal.  Dan Boeckner is the singer for Wolf Parade so the vocals seem familiar, but together with Alexei Perry it’s a totally different sound.  These two tracks are favorites off their third release, Sound Kapital.

8. “So American” – Portugal. The Man.
9. “Got It All (This Can’t Be Living Now) – Portugal. The Man.
10. “Sleep Forever” – Portugal. The Man.
This psychedelic rock band from Portland doesn’t stray far from its roots in Alaska with themes of nature and family for their latest release, In the Mountain In the Cloud. The expansive treatment for these songs finds a timeless groove, backing up soulful vocals by singer/songwriter John Gurley.

11. “Shangri-La” – YACHT
“Shangri-La” is the title track of the new release by Portland’s dance pop duo known as YACHT.  Claire L. Evans takes the vocals to a Utopia of choruses and Jona Bechtolt joins in while overseeing their melodic electro-universe.

12. “Eyes Be Closed” – Washed Out
13. “Amor Fati” – Washed Out
With easily the raciest album artwork of the summer, Washed Out released Within and Without, a continuation of the chill wave surge Ernest Greene defined two years ago.  He no longer buries his vocals, confidently singing out with an expanded sound in various songwriting structures.

15. “Glowing Mouth” – Milagres
Brooklyn’s quintet Milagres has been streaming this elegant tune, which is the title track of a release due mid-September.  Singer/songwriter Kyle Wilson’s soaring falsettos float above an ambient musical landscape.

17. “Black Water” – Apparat
Apparat is the vehicle for Berliner Sacha Ring, embracing electronic music of all forms since the mid-90s.  “Black Water” is a free download from the newest release, The Devil’s Walk, due in late September.  Lush layers of vocals and synths build in this lovely melodic composition.