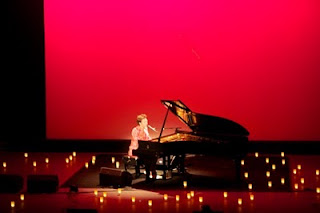 To see Rufus Wainwright has been on my concert bucket list for some time. So when a stop on his latest tour included a small venue in near my home in Connecticut that would complement his intimate songs, I jumped on the ticket bandwagon. The current tour of his original soul-searing work was exactly the concert experience I was looking for. Born into folk legend lineage, with his father Loudon Wainwright III and his mother Kate McGarrigle used to sing with her sister Anna as The McGarrigle sisters, Wainwright has dabbled in rock, opera, dance, film and theater. But it is his breathy, emotional tenor communicating volumes with a lyric that makes him so unique in the crowded market of musicians.


Wainwright entered the dark stage in silence, following the path of a spotlight wearing a long, black, elegant gown with a train that stretched across the stage. The audience was instructed that for the first set, we were refrain from applause until he had exited the stage. (The second set however, we could “applaud to our hearts content.”) Wainwright burst into the first track off his new CD, All Days Are Nights: Songs For Lulu, which was a great reminder of what an accomplished pianist he is with his hands flying across the keyboard. He continued through the entire work, only stopping for the occasional sip of water from a goblet. The visuals by Douglas Gordon on a screen covering the back wall revolved around a monstrous green eye with lashes that looked more like dangerous porcupine spines and scaled skin of a reptile. Wainwright has said that Lulu refers to the Louise Brooks character from the movie Pandora Box yet the theme also covers his relationship with his mother -- the song cycle of the CD providing the opportunity to work through his emotional turmoil of the past year with his mother’s death in January. After the last song, Zebulon, Wainwright lifted his long fingers from the keys and stood up slowly. He then turn to leave, retracing the path of his entrance with the measured steps of a modern dancer until the crowd could show their appreciation.

The second set allowed life to go on as Wainwright returned in style wearing a coral patterned suit with a matching shirt and white shoes. He smiled and returned to the piano, chatting about the drive to the suburbs and playing selections from his repertoire which included “Cigarettes and Chocolate Milk,” and “The Art Teacher.” His sister Martha returned for a few songs after opening up for him, even bringing out her baby boy (his first time on stage! I can only imagine the fun that child will have with Uncle Rufus.)
Wainwright mused how he’s at loss to explain a country that would have people from Snookie to Hillary, “varied?” He continued, “Not unique. Eclectic?” He then offered “Going to a Town” as a highlight for the encore, a beautifully stripped down version from the one on Release the Stars. The final song was “The Walking Song” by his mother, a lovely tribute after explaining how wonderful it’d been to witness the outpouring of love after her death from sarcoma cancer in January. Plus one dollar from every ticket went to research for the disease so he graciously thanked everyone for that.
PERSONAL PLAYLIST: Rufus Wainwright came into my life when he accompanied David Byrne on an aria back in 2004, a few years after his second CD Poses came out. I love his cover of “Across the Universe” on that CD and another favorite is the single “Hallelujah” (2009) a cover of a Leonard Cohen song. Just listening to his “Going to a Town” from his 2007 CD, Release the Stars makes my heart swell. His sexy take on “Bewitched,” the Rogers & Hart song from the musical Pal Joey, played during the credits of The History Boys – a perfect collaboration. I’ve also listed the first and last tracks of the new CD, perfect bookends to his newest work. Of course there's tracks available at his myspace as well. Enjoy!

*** UPDATE Rufus Wainwright has since appeared on KCRW's Morning Becomes Eclectic which you can listen to at this link. Nice to listen in on the interview -- more than just banter during the concert, etc.
http://www.kcrw.com/music/programs/mb/mb100819rufus_wainwright
Posted by JaneJS at 2:01 PM
Email ThisBlogThis!Share to TwitterShare to FacebookShare to Pinterest
Labels: KCRW, Rufus Wainwright
Newer Post Older Post Home