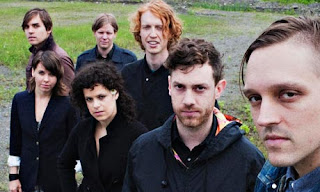 NPR’s Exclusive First Listen has opened up the gates for a preview of the highly anticipated third release from Canada's indie sensation Arcade Fire, released August 3rd. Between that and the opportunity to see the band play live at Madison Square Garden in NYC on Thursday night, August 5th on their Youtube channel, fans had an opportunity to weigh in on the new offering for themselves. Clips from the concert are posted there now -- it was a great concert full of energy on stage and in the crowd. It would have been nice to seen Spoon as well but a treat to have a front row seat for the Arcade Fire set in front of my computer along with 4 million other fans (if only I didn't have to hit refresh a few times!)

The Suburbs opens with the title track meandering along with images of kids running through yards. It’s a glimpse into frontman Win Butler’s childhood near Houston, Texas, as appropriately enough the band is his vision – with his brother Will and wife Reginé Chassagne beside him to round out a solid group of seven, plus additional musicians as needed. Things pick up by the second track, “Ready to Start” which along with “Empty Room” could be the instant classic “Keep the Car Running” was for their last CD, Neon Bible. The other tracks present a cohesive whole with Win Butler’s disctinctive voice riding the instrumental wave behind him, never overpowering and always in synch with the rest of the band. Some surprises included the hard rollicking sound of “Month of May” and the brazen synths of “The Sprawl II.” Mellower moments were presented during the stripped down “Wasted Hours” and the lovely symphonic end piece, “The Suburbs (continued).”
If I could pick any time and place to see Arcade Fire it would have been during their early days when they played the Judson Memorial Church in NYC's Greenwich Village, that shrine to early modern dance. The vast space of Madison Square Garden holds little appeal to me but sitting in front of a computer screen, I’ll gladly submitted to the vision of director Terry Gilliam. It’s online community at its best. The band hit the stage with the single off the new CD "Modern Man" and kicked it into high gear from there. I learned that while Win Butler may be the frontman of the band, giving a shout out to those of us online with a "Hi Internet," his brother Will Butler is the showman -- dancing wildly with a tambourine festooned with streamers, running circles around the stage and all sorts of energetic antics. Their new song "Rococo" provided a soaring redemptive moment with its staccato vocals urging a singalong with the audience. During the encore, "The Sprawl II" was restarted because of a drum machine, or so Win Butler said, but I'm thinking Reginé Chassagne really shouldn't be taking solos... I can only imagine the many takes it took in the studio to get it sounding on key which it certainly didn't live. (As one without a great ear for pitch, I know if I hear it it can't be right!)

There was an online poll to see what people would guess to be the last encore of the show, "Wake Up," "Neighborhood #3 (Power Out)" or "Keep the Car Running." All were offered up as highlights in the show but the first one was chosen for the finale. Not sure if that was the winner of the poll but it made for a winning moment to close the concert.
Posted by JaneJS at 9:39 PM
Email ThisBlogThis!Share to TwitterShare to FacebookShare to Pinterest
Labels: Arcade Fire, KCRW
Newer Post Older Post Home