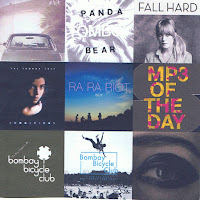 Wasn't sure whether to call this next playlist late summer or early fall 2010. I know it's not technically autumn but the acorns are dropping and the sun isn't shining as strong as it was a few weeks ago. No surprise to see songs here by Arcade Fire, Fitz & The Tantrums and Rufus Wainwright after my recent posts but hope you'll enjoy the selections, plus of course the craft of compilation! Link to listen here.

1. Where I'm Going - Cut Copy
This single is actually found as a free mp3 song of the day from Spinner.com but I heard it through 107.1 The Peak's new music show NEXT. Sure I'm a sucker for a good sing-a-long and any kind of vocal shout outs as this electropop band from Australia happily provides. At first listen, this definitely rated as my "NEXT new favorite song" and gets the opening spot to kick off my latest playlist.


2. Fall Hard - Shout Out Louds
Another single off the CD Work from the Swedish band known for its catchy indie pop tunes over the past decade. The infectious chorus provides another sing-a-long opportunity (in perfect English no less!)

3. Fader - The Temper Trap
Here's another band from down under, though leaning more towards the alt rock label. This single off their CD Conditions released last year but still gaining airplay in the U.S. Just can't go wrong with some happy 'woos' in the chorus and a simple boom-chuck, boom-boom-chuck drum beat I think I could even play.

4. Evening/Morning - Bombay Bicycle Club
5. Open House (Bonus Track) - Bombay Bicycle Club
6. Lamplight - Bombay Bicycle Club
This UK band released a full length CD last month called, I Had the Blues But I Shook Them Loose. It included some new and not so new songs, so I found three faves for my playlist without restrictions or hesitation regarding that matter. Their sound is fresh and free from over thinking things, which I suppose is really easy to do when you're so young!


7. Slow Motion - Panda Bear
The musician behind Panda Bear is Noah Lennox of Baltimore, also a founding member of Animal Collective. In this single, his signature echoing vocals cascade over a musical landscape all his own.


8. Boy - Ra Ra Riot
Ra Ra Riot's next CD The Orchard comes out August 24th right after I'm posting this playlist but the Syracuse group released this gem of a song on an EP of the same name over the summer. "Boy" embodies the band's sound, chock full of energy and enthusiasm.


9. The Suburbs - Arcade Fire
10. Modern Man - Arcade Fire
11. Rococo - Arcade Fire
12. Empty Room - Arcade Fire
Yes, four songs is a lot from one band for a playlist. (Hasn't happened since last winter when I had four tracks off of Spoon's Transference and I had the web police after me for posting them on the Grooveshark widget!) But it really wasn't easy even choosing only these tunes off the epic album that is sure to be on many lists for 'best of 2010' picks. The sound is a bit more polished, less free form than before yet no less rambunctious or offering soul searing melodies when need be. Arcade Fire is based in Montreal but this collection of songs takes us back to the Butler brothers childhood outside of Houston, Texas with vivid memories of suburban life.

13. Pickin' Up The Pieces - Fitz and The Tantrums
14. L.O.V. - Fitz and The Tantrums
Here's another official full length CD, Pickin' Up The Pieces, from this L.A. band making news for their hip retro sound. It's blue eyed soul meets a pumped up edgy indie vibe and you can preview the album on kcrw until September 14th. Their live show kicks up the energy even further and I totally recommend catching a gig in your area if possible as they hit the road in support of the album (tour dates here!)


15. Zebulon - Rufus Wainwright
This is the coda for the newest CD by Wainwright, All Days Are Nights: Songs for LuLu. It's a emotional ride as he delves into the sadness of his past year with the passing of his mother, folk singer Kate McGarrigle. Last month I witnessed his emotional tenor vocals and accomplished piano playing in concert as written up on a recent blog post -- Rufus Wainwright is a true artist for our trying times.