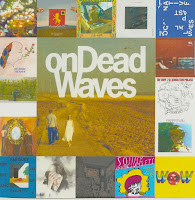 The season is in full swing with the Fourth of July behind us so here’s a playlist of new tunes to add to your summer soundtrack. There’s another single from Beck teasing his next album and others from Glass Animals, Blind Pilot and Unknown Mortal Orchestra.  A debut by onDeadWaves is perfectly chill while indie rockers Parquet Courts, Deerhoof and Wolf Parade return to kick things up a gear. Then things mellow out with ambient tracks by Gold Panda, Hammock, CFCF.  Listen on Spotify or as a YouTube Playlist (without Deerhoof or the new Kinobe remix however).

1. “Life Itself” – Glass Animals
English indie rock band Glass Animals is ready to release a sophomore album, How to Be a Human, with this rhythmic single “Life Itself” leading the way. Singer Dave Bayley grew up in Texas with dreams of becoming a doctor, but that fell by the wayside after forming this unique quartet in 2012.

3. “Umpqua Rushing” – Blind Pilot
Indie folk band Blind Pilot is a six-piece based in Portland that will soon drop its third album since 2005, And Then Like Lions.  The single “Umpqua Rushing” confidently ushers in the new collection with the soulful singing of Israel Nebeker.

4. “Community of Hope” – PJ Harvey
English writer, singer-songwriter and multi-instrumentalist PJ Harvey has released her ninth studio album since 1992, The Hope Six Demolition Project. “Community of Hope,” originally one of her poems, is a rallying cry condemning urban development in D.C.

6. “Plastic Thrills” – Deerhoof
San Francisco based experimental rock band Deerhoof has released its 13th studio album since 2009, The Magic. The quartet’s dense textures are anchored by the wavering vocals of Satomi Matsuzaki.

8. “The Pool” – Papertwin
Brooklyn based trio Papertwin’s third studio release Vacation acknowledges a variety of influences, from The Cure to Gillian Welch. “The Pool” is synth heavy but doesn’t dwell in the past.

9. “Past Lives” – Local Natives
In September, L.A. based indie rock band Local Natives will release its third album, Sunlit Youth. The single “Past Lives” is a musical journey all its own, from the opening cry of “Save Me” to the layered sonic romp that follows.

10. “California” ­– onDeadWaves
This new band formed by British singer-songwriter Polly Scattergood and James Chapman of Maps has released a self-titled debut album full of laid-back shoegaze. “California” is an ode to the U.S. West Coast and a perfect summer song.

12. “Floating World” – Wolf Parade
Canadian indie rock band Wolf Parade was formed in Montreal in 2003, yet it’s just back after a five year hiatus – the new self-titled EP (like the three before it) effortlessly brings the original scrappy sound back to life.

13. “Wow” – Beck
West Coast musical wunderkind Beck released a second single, “Wow,” from his forthcoming album due in October that is three years in the making (some songs predate the 2014 Grammy-winning Morning Phase). Cited influences include The Strokes and the Talking Heads, plus a yearning for communal hands-in-the-air concert moments.

14. “Slip Into Something More Comfortable – Psychemagik Late Nite Remix” – Kinobe
English electronic music duo Kinobe have been on the scene since 1998, most recently with remixes of the song “Slip Into Something More Comfortable.” Julius Waters and Dave Pemberton are known to take a ten-piece touring band out of the studio on the road in order to recreate studio compositions.

15. “In My Car”­ – Gold Panda
Gold Panda is a British electronic record producer, performer and composer who has performed since 2009. His recent third album, Good Luck and Do Your Best, is filled with ambient tracks such as the lilting tune “In My Car.”

16. “Reverence” – Hammock
Nashville’s Marc Byrd and Andrew Thompson use a combination of live instrumentation and electronic beats for their musical project since 2005, known as Hammock.  Its ninth album Everything and Nothing includes delicate ambient songs such as “Reverence.”