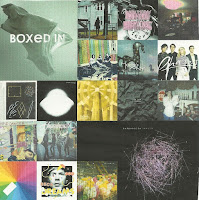 Hurray for summer! Of all the seasons, this one simply demands a soundtrack of fresh tunes to rock the warm weather.  This playlist kicks off with a surprise treat from Beck with other outtakes from sessions by The National and St. Vincent. Many newer bands are back with solid second albums: De Lux, Oberhofer, and Motopony. Plus check out songs off debut albums (Avid Dancer, Grounders, Boxed In, Black Rivers, Jamie xx) and more. Link to listen on Spotify or as a YouTube Playlist.

** EXTRA CREDIT IF YOU CAN NAME THE BANDS WITH TWINS IN THE LINEUP (ANSWER AT THE END OF THIS POST!)

1. “Dreams” − Beck
Beck has tossed aside that folky hat and is back on the dance floor with this single from an unnamed album to follow up last year’s Grammy-winning Morning Phase.  The song cranks up immediately with a killer electric guitar riff, sturdy back beat and echoing vocals that drop in, out, and around – carousing for over five minutes.

4. “Burning for No One” – The Cribs
English indie rock band The Cribs has released a sixth album since 2002, For All My Sisters, with the help of producer Ric Ocasek.  This single flaunts the trio of brothers’ signature taut punk sound.

5. “Sedona” – Houndmouth
Houndmouth is a folk rock quartet hailing from New Albany, Indiana. This infectious tune is off the group’s second album since 2011, Little Neon Limelight.

6. “Daylights Gone” – Motopony
Seattle’s self-proclaimed “hard-soul/glitch-folk” band Motopony has released a sophomore album, Welcome You.  “Daylights Gone” serves as the single with call out vocals by Daniel Blue to join in the musical jam.

7. “Sunshine on My Back” – The National
American indie rock band The National was formed in Cincinnati in 1999 and is now based in Brooklyn after six albums. This single from the Trouble Will Find Me (2013) sessions features Sharon Van Etten backing up singer/lyricist Matt Berninger in his characteristic low-key approach to vocalizing.

8. “I’m In Love With My Life” – PHASES
PHASES (formerly Jjamz) is an indie pop band from L.A. with former Phantom Planet singer Alex Greenwald. His home experiments using an outdated version of GarageBand provided the foundation for this catchy single from a future album.

10. “All Your Love Is Gone” – Boxed In
British producer Oli Bayston is the mastermind behind the new band Boxed In, earning praise with this single off a self-titled debut album.  The song luxuriates in a multi-layered synth soundtrack and Bayston’s moody vocals.

11. “Loud Places” – Jamie xx
Jamie xx is the stage name for Jamie Smith, a music producer, remix artist, and member of the English indie band the xx.  His debut solo album, In Colour, is filled with a deft electronic touch (here with the help of bandmate Romy Madley Croft on vocals).

12. “The Ship” – Black Rivers
Brothers Jez and Andy Williams were two-thirds of the English rock band Doves from 1999 until the band went on hiatus in 2009.  They have now joined together in a new musical project Black Rivers. “The Ship” exhibits the same emotive sweep of song just like the Doves.

13. “Can’t Keep Checking My Phone” – Unknown Moral Orchestra
Portland based singer, guitarist and songwriter Ruban Nielson focuses on a downfall of modern love with this single from the band’s third studio album since 2010, Multi-love.  It’s a swanky, ironic composition about long distance yearnings.

14. “Secret Friend” – Grounders
Toronto quartet Grounders offers an easy vibe for this single off the band’s self-titled debut album.  The haze of low-fi production does not mitigate the melodic pull of the tune.

16. “Teenage Talk” – St. Vincent
Annie Clark a.k.a. St. Vincent had this single left over from the sessions for her last Grammy-nominated album (2014’s self titled St. Vincent). It’s a sweet, nostalgic tune with this multi-talented artist as a more straightforward storyteller.

17. “Sagras” − The Tallest Man on Earth
Indie folk Swedish songwriter Kristian Matsson is known for recording and producing his own material since 2005, but for his fourth album as The Tallest Man on Earth he utilized a full band for almost every track.  “Sagras” shows the resulting lush instrumental backing, while Matsson’s vocals still command attention.

18.  “Home” – Barbarossa
Barbarossa is the musical project of London multi-instrumentalist James Mathé, enlisting the vocals of Swedish singer José González for this haunting tune. (They are band mates together in the group Junip).  The minimalist electronics of “Home” is from a third album, Imager.