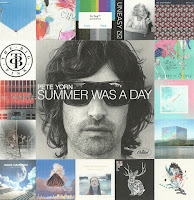 With the East Coast bracing for a major snowstorm, it’s handy to have my next playlist ready for consumption. New releases by Cage the Elephant, GIVERS, and The Decemberists are ready to heat things up while a stand-alone single by The Dandy Warhols, “You Are Killing Me,” fits the mood as things grind to a halt. There are also teaser songs from albums dropping soon: Chairlift, School of Seven Bells, Ra Ra Riot, Animal Collective, Pete Yorn and more. Plus check out new bands Knox Hamilton and Sheer along with a pick off the official debut from Car Seat Headrest. Listen via Spotify at this link or as a YouTube playlist.


**ANOTHER CHANCE FOR EXTRA CREDIT IF YOU CAN NAME EVERY BAND WITH FAMILY MEMBERS IN THE LINEUP (ANSWER AT THE END OF THIS POST!)


1. “Badvertise” – Dr. Dog
Philly area band Dr. Dog recently collaborated with Pig Iron Theatre for a performance, Swamp Is On, which included this energetic frenzy of a song. The band is also revisiting songs from their debut back in 2001, a cassette release known as Psychedelic Swamp transformed into an official studio album.

4. “Water” – Ra Ra Riot & Rostam
Ra Ra Riot is an indie rock band formed in 2006 at Syracuse University, now based in Brooklyn. The group collaborated with Vampire Weekend’s Rostam Batmanglij for the songwriting and production of this single from the upcoming fourth album, Need Your Light.

5. “Romeo” – Chairlift
Synthpop duo Chairlift is releasing a third album since 2005, entitled Moth. With a pulsing beat, “Romeo” is off to the races with layers of Caroline Polachek’s enchanting vocals.

6. “Hightimes” – The Big Pink
The Big Pink is an electronic rock band from London, a quartet of multi-instrumentalists that has been creating music since 2009. “Hightimes” is the anthemic opening track from the upcoming EP Empire Underground.

7. “You Are Killing Me” – The Dandy Warhols
Portland rockers The Dandy Warhols released this single featuring the band’s signature chug of electric guitar.  With singer Courtney Taylor-Taylor’s deadpan delivery, irony ensues once again.

10. “Summer Was a Day” – Pete Yorn
Singer-songwriter, guitarist and drummer Pete Yorn will release his seventh studio album since 2000 in March, entitled Arranging Time. He is returning to solo work after performing as The Olms with J.D. King, and this single finds his artistic introspection intact as the poetic visions pour forth.

11. “Confusion” – School of Seven Bells
NYC’s synthpop band School of Seven Bells was creating music during a dark time—founding member Benjamin Curtis was being treating for lymphoma; he died in 2013 despite a positive prognosis. The resulting material is part of a fourth and final album, SVIIB (as the name of the band is often abbreviated). The heartbreakingly sweet single “Confusion” is a tribute to the strength of all involved.

12. “Work It Out” – Knox Hamilton
Knox Hamilton is a quintet from Little Rock, Arkansas, influenced by 70s rock as evident in the debut EP How’s Your Mind. The melodic vocals carry the listener along for a fun ride throughout this optimistic tune of reconciliation.

13. “Trouble” – Cage the Elephant
Cage the Elephant recently relocated from Kentucky to Nashville where its fourth album, Tell Me I’m Pretty, was produced by Dan Auerbach (Black Keys, The Arcs). Matt Schultz’s gritty vocals provide the perfect conduit for their blend of pop and punk rock.

14. “FloriDada” – Animal Collective
Animal Collective is an experimental pop quartet originally formed in Baltimore in 1999. This wacky opening track for its tenth album, Painting With, is actually inspired by the detractors of state of Florida, which the band says gives the area a certain charm.

17. “Believe Your Mine” – Nada Surf
NYC alt quartet Nada Surf also has a ninth album coming out soon, titled You Know Who You Are.  The warm vocals of Matthew Caws have carried this band along into a blissfully mellow territory since 1992.

18. “Monochrome” – Sheer
Sheer is a L.A. four-piece with a fondness for 90s buzzy production since forming in 2010. “Monochrome” is the opening track for the band’s debut album, Uneasy, and as the first song the band ever wrote together, it immediately finds the sweet spot of collaboration.