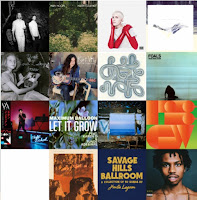 Here's another playlist to catch up on new releases by fave bands such as Deerhunter, YACHT, Beach House, Yo La Tengo and more. There are also songs by new configurations of musicians (EL VY) plus solo work by Martin Courtney and Chris Walla. As always, there are a few newbies to welcome to the music scene fold: Maury and Legs. Listen on Spotify via this link or as a YouTube playlist.

1. “Return to the Moon” – EL VY
The National’s Matt Berninger and Brent Knopf (Ramona Falls, Menomena) have been talking about collaborating for years, and now a debut album by their musical project EL VY is ready for a listen. This is the title track for the collection, a bouncy, fun tune with rambling lyrics and sing along chorus.

2. “Breaker” – Deerhunter
Atlanta’s indie rock quartet Deerhunter has released its seventh studio album since 2001, Fading Frontier, written by songwriter Bradford Cox after he was hit by a car and the accident became a musical turning point. The song “Breaker” finds Cox sharing lead vocals with guitarist Lockett Pundt for a lighter pop sound.

3. “I Thought the Future Would Be Cooler” – YACHT
L.A. band YACHT was formed in Portland in 2002 by musician/producer Jona Bechtolt and singer Claire L. Evans. They craft fun dance punk songs with a lyrical depth as exhibited in this title track for the band’s sixth album.

5. “Pretty Pimpin” – Kurt Vile
Kurt Vile is a former member of Philly band The War on Drugs who just released his sixth album since 2008, believe I’m going down… As a singer/songwriter, multi-instrumentalist and producer, Vile’s goal was to present songs that have a lo-fi sound, as if they're written and played on his couch.

6. “Friends” – Raury
Raury is a young musician from Atlanta who fearlessly mixes soul, hip hop and folk. Last year he put together a mixtape and soon signed with Columbia Records. This friendly, open composition, “Friends,” is off his second album All We Need.

7. “Rickety” – Yo La Tengo
Hoboken’s Yo La Tengo has released a mix of covers along with a few originals like “Rickety” for its fourteenth full length album, Stuff Like That There. This memorizing tune showcases the band’s strength in acoustic arrangements and sweetly sung vocals.

9. “Falling” – Here We Go Magic
NYC-based band Here We Go Magic is known for its buoyant songwriting and energetic arrangements as witnessed in “Falling.” This tune is off the fourth album since 2008, Be Small.

11. “Jabberwocky” – Panda Bear
Noah Benjamin Lennox is the musical mastermind behind Panda Bear, releasing five solo albums since 1999 while Lennox collaborated in Animal Collective. This Baltimore native is now living in Lisbon, indulging in experimental psych pop with this lush composition, “Jabberwocky,” off the EP Crosswords.

13. “Let It Grow” – Maximum Balloon, Karen O, Tunde Adebimpe
Maximum Balloon is Dave Sitek’s side project when he finds time away from being a producer/guitarist with TV on the Radio. This infectious single -- with a strummed rhythm supplementing the drums -- for an upcoming sophomore album, “Let It Grow,” enlists a charming collaboration with vocals by Karen O and TV on the Radio’s Tende Adebimpe.

15. “Doll’s House” – Youth Lagoon
Youth Lagoon is the moniker of Boise, Idaho musician Trevor Powers, who has released a third album since 2010, Savage Hills Ballroom. His songs are always densely presented and deeply personal, even in this instrumental song “Doll’s House.”

16. “Kanta’s Theme” – Chris Walla
“Kanta’s Theme” is the enigmatic opening track for Field Manual, the first solo release since Chris Walla left Death Cab for Cutie. This change, along with a move with his family to Norway, found him reflective and seeking musical renewal as he started plugging in tape machines to create loops.