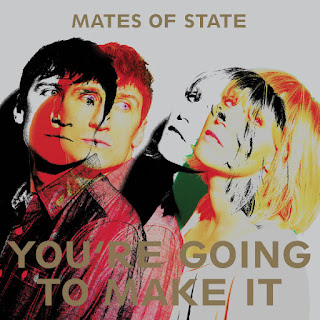 Since 1997, indie band Mates of State has embraced feel good harmonies and a sweetly positive outlook in punchy, hook filled tunes. The couple Kori Gardner (vocals/keyboard) and Jason Hammel (vocals/drums) clearly maintain the glow of musical compatibility in their self-produced EP You're Going to Make It, out today via Barsuk Records. As a fan and fellow suburban Connecticut parent, I interviewed Hammel for PopMatters in 2010 and caught them on tour in support of their last album, Mountaintops (2011). The wildly catchy single from that release, "Palamino," was an easy pick for my Fall 2011 New Music Playlist.

Family life has only strengthened the bond and it shows. The video even includes their tow-headed daughters. Magnolia as a dancer and June as a new student who launches a blow out party right in school. It is based on a true story of sorts as June once sang to a class instead of choosing to read a book as an introduction. Welcome back and sure, why not bring the whole family. Check out the video on YouTube or below and give a full listen to the five song EP -- although I warn, you it'll be over way too early. Mates of State will also be at Bowery Ballroom in NYC on July 10 as part of a summer tour.