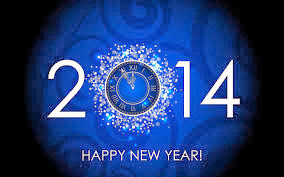 Happy New Year to all that consider new music a must in their lives like I do! While basking in the clean slate that comes every January, there's a nice list of new releases to look forward to in the coming weeks, along with a new compilation from Starbucks in time for Valentine's Day.  Albums from blog faves Broken Bells, Painted Palms and Bibio drop in January, with Bombay Bicycle Club, Fanfarlo and Milagres following in February (see list with details at the end of this post).

Beck is also due with an album in February, Morning Phase, after signing with mega-label Capitol and releasing a series of singles: "Gimme," "Defriended," and "I Won't Be Long."  Plus he will be featured in a new compilation from Starbucks, Sweetheart 2014 (available February 4th).  Beck provides a lilting cover of "Love," John Lennon's plaintive poem about the subject. Other musicians I'm looking forward to hearing on the compilation include Phosphorescent, Vampire Weekend and Jim James.  And I've started my own yearly tribute to the holiday, after happily creating romantic song playlists in 2013 and 2012.

Check out the Beck song in a preview here: