Video for Big Deal's "In Your Car" Off New Album 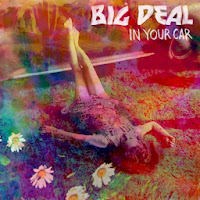 Big Deal is a London-based duo that just released a sophomore album, June Gloom (via Mute Records).  They call their style noise pop, but their songs are full of swirling melodies featuring the evenly weighted vocals of Kacey Underwood and Alice Costelloe in an alluring he said/she said overlay.  Produced by Rory Attwell (Veronica Falls, PAWS and Male Bonding), the new collection utilizes a full band lineup with friends and touring mates Huw Webb on bass and drummer Melissa Rigby.  It continues the appealing credo of equally split gender lines for the group.

"In Your Car" serves as the first single off the collection. According to Mute, Costelloe first hummed this melody during a drive along the California coast.  It's a great summer sing along song, although the video veers into trippy territory complete with dance moves by unexpected company along the way as directed by Danny Perez (Animal Collective, Panda Bear and Black Dice).  As Costelloe explains, “We kept seeing these scary dancing bears in our heads when we recorded the song and we wanted this strange other worldly landscape to match it. I realized my home town of Joshua Tree would fit really well, I was there for my grandmother's funeral and she appears on the cover of the single.”  Underwood adds, “That fun, road trip kind of a song doesn’t happen a lot with English rock bands because it’s just not in the culture.”