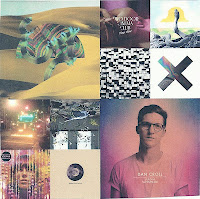 With all the crazy weather adding unnecessary drama to the national elections this fall, at least music fans could be thankful for all the fresh offerings available, presenting a much needed distraction (as long as there was electricity!)  New releases from indie stalwarts Deerhoof, Stars and Cat Power complemented repeats from Two Door Cinema Club, the xx and Freelance Whales along with debuts from Django Django and Melody’s Echo Chamber.   Ready for another playlist with background notes below and link to listen here!

1. “From Nowhere” – Dan Croll
“From Nowhere” is the first official single is from an upcoming debut album from Liverpudlian and MBF Songwriter Award winner Dan Croll.  This spunky tune provides a fun introduction to what is to come.

5. “Ruin” – Cat Power
Singer/songwriter Cat Power (neé Charlyn Marie Marshall) has been performing for over fifteen years with her powerful, unique voice.  Marshall plays all the instrumentals on her ninth album, Sun, even incorporating electronic elements this time around.

6. “Angels” – The xx
Dubbed a “miseralist” band by The New York Times, The xx resume their extremely laid back, low-fi approach to songwriting.  “Angels” is the single off the sophomore album, Coexist.

9.  “I’m Not Talking” – A.C. Newman
Canadian musician and singer/songwriter Carl Newman (a.k.a. founding member of The New Pornographers) has released a third solo album, Shut Down the Streets. This captivating single, “I’m Not Talking,” features the familiar vocals of band member Neko Case.

10. “Halls Of the Summer” – Caspian
Massachusetts post-rock quintet Caspian released their third studio album of epic instrumentals called Walking Season.  “Halls of Summer” is more of a musical journey than a song.

11.”Cali in a Cup” – Woods
Brooklyn trio Woods channels a sunny West coast ambiance for this single off their seventh album, Bend Beyond.

13. “97 Heart Attack” – Earlimart
L.A. indie rock duo Aaron Espinoza and Ariana Murray have been blending their voices since 1999 as Earlimart.  This simple, lilting tune is off their seventh album, System Preferences.

14. “Locked Out” – Freelance Whales
NYC-based Freelance Whales expand their organic blend of acoustic chamber pop with electronic embellishments for their sophomore release, Diluvia. Frontman Judah Dadone continues to lead the way with his airy tenor, which slips easily into an ethereal falsetto.

15. “Hold On When You Get Love and Let Go When You Get It” – Stars
Indie pop band Stars was formed by vocalist Torquil Campbell and keyboardist Chris Seligman in Montreal back in 2001, but they are now living in NYC.  This elegantly sweet offering is off their sixth album, The North.

17. “Magic Kids” – Indians
Søren Løkke Juul has pre-released a few tracks off a debut album due in January, Somewhere Else. This Copenhagen musician’s latest project has already toured extensively with intriguing, atmospheric compositions such as “Magic Kids.”