Interview with Daniel Blue of Motopony 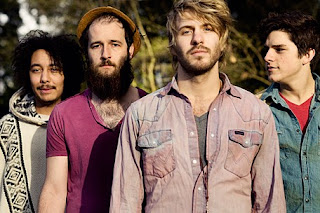 The Motopony song "Seer" caught my ear earlier this year, with it's funky mix of indie pop and folk rock. There was something in the singer's delivery that seemed authentic, not the usual overly polished vocals which dominate the airwaves these days. I chose this song for my summer playlist and gave a good listen to their entire self-titled release.

It was surprising to hear a variety of stylistic treatments in the band's first collection of songs, which revealed a confidence within the group. This music is clearly not created by guys still in college or younger -- frontman Daniel Blue had a career in fashion design before poetry and music took over. His story sounded interesting even before I was offered the opportunity to interview him last month. Over the phone he was very sweet, opening up with a very polite, laid-back, and accent-twinged voice about where he's been plus where the band is going on tour and beyond.