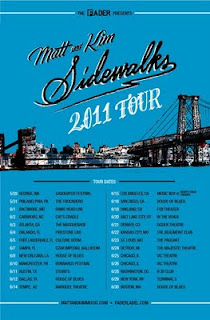 The youth of summer were out in force for the beloved indie couple Matt and Kim at Terminal 5 on June 29, or at least those who planned ahead since the night sold out three months ahead of the date. The cheers began as the little platform with Kim’s drums and Matt’s keyboards was wheeled on to center stage. When the performers appeared, they promptly got up on their stools with arms raised and wide smiles as the place exploded in applause. Matt even shook his head in disbelief, before hopping down to start the intro of “Block After Block” from their latest release, Sidewalks. Kim then added her overly energetic drumbeat and the dance party began. Matt’s blue cardigan was off by the third song, saying how “Mr. Rogers has come out early.” Kim then joked with Matt to take it off slowly, “for the ladies!”
With buildings of their Brooklyn neighborhood sketched on the backdrop (the cover art of Sidewalks), Matt and Kim hits such as “Good Ol’ Fashioned Nightmare,” “Grand,” “Yea Yeah,” and “Cameras” were spread out between other tunes from their three releases. The simplistic song structure left lots of room for busting out dance moves, while playing instruments and thrown confetti along with a multi-color balloon drop added to the festival atmosphere. Matt punctuated his speech with “Oh my gosh,” saying how this tour was the best of their lives so this night might be the best night of their lives. He took to holding his heart and bowing his head in deference to the love of the hometown fans. Kim took the mike for expletive-ridden anecdotes, offering up their phone number so everyone could to call them after the show and a cocktail recipe, which involved one part red wine and the other part Red Bull. There was some crowd surfing of course, but Kim took the prize with a record-breaking surf (see video below). The set ended with “Daylight,” providing one more enthusiastic sing along before the encore, which was a megamix of songs. Matt and Kim bounced around the stage, singing and dancing just like everyone else before waving goodbye.
My PopMatters interview with Matt here.