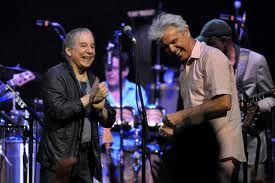 I can't say I love how Brooklyn Vegan feels a need to post every picture taken at a concert, couldn't they weed out a few? But then picking up a video from YouTube showing David Byrne surprising the crowd June 7th during an encore at Webster Hall brilliantly told the real story... Byrne appears in his trademark white (at least these days) towering over the tired Paul Simon, full of happy energy and the joy of performance. A rollicking version of the Talking Head's "Road to Nowhere" showcased Byrne's strong singing and exuberance while Simon tried to keep up (link below).

For more concert footage of Byrne leading the charge, his latest trek "The Songs of David Byrne and Brian Eno Tour" has been made into a film called Ride Rise Roar which was released May 31. Directed by David Hillman Curtis, the documentary covers backstage as well as performances across the U.S. and Europe. I was lucky enough to see the tour in Oxford, England and wrote about it here. Looking forward to reliving it all over again!