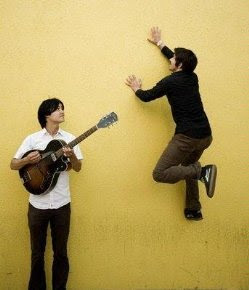 The Dodos continued a busy tour with a stop at The Bowery Ballroom on June 9 before playing The Music Hall of Williamsburg in Brooklyn June 10. The New York crowd was supportive and enthusiastic during the show. New material was rolled out with confidence, from the opener “Good” into “Black Night,” the single off the new release No Color which was given the extra punch of live performance. “When Will You Go” followed without a break and only after that song did Long speak to the crowd with a “Thanks” and the question, “How you’all doing?”

Last March Meric Long spoke to PopMatters before embarking on the tour about the need of a third touring member to join him and drummer Logan Kroeber. They found a guitarist to fill the role but he was never introduced and looked more like a third wheel up on stage. As Long and Krober faced each other and sang, it was as though he was never really invited to the party.

The concert was more about the business of presenting their original, percussion-driven music, with breaks for tuning and a few quick thanks. “Longform” from Time to Die plus “The Season” and “Fools” off of The Visiter were offered to round out the set. At the encore Kroeber gave a shout out to his brother and then two new songs closed the evening: the banging intro drumbeat of “Going Under” and the opening cascades of guitar of “Don’t Stop.”