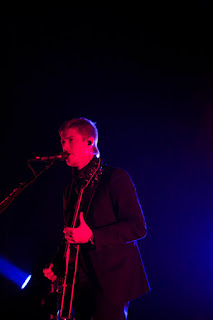 Interpol offered an overly polished performance at Radio City Music Hall to a full house of fans February 17 in support of their new self-titled release. The band was formed by Daniel Kessler and Paul Banks at New York University in 1997 and quickly became a leading voice in the resurgent New York City music scene along with The Strokes and the Yeah Yeahs Yeahs. The new line up includes Brandon Curtis from the Secret Machines on keyboard and David Pajo of the Yeah Yeahs Yeahs and Stint filling in for the departed Carlos Denger. Playing live highlights drummer Sam Fogarino for providing a range of dynamics throughout the songs. Interpol relies on deep emotional swings in their music and the dynamics of drums provides the ebb and flow.

“Success” opened the show with the classic Interpol sound of Kessler’s strumming guitar and Banks’ vocals lilting over the venue. With only a few ‘thank yous’ between songs, the band chugged through a set list of fan favorites: “PDA,” “Evil,” “Barricade,” “Rest My Chemistry” and “NYC.” Newer songs such as “Summer Well,” and “Memory Serves,” were solid contributions to the Interpol repertoire. While the band confidently filled the stage and acoustics are always great in this space, there was little room for spontaneity. When Kessler would travel to the edge of the stage in order to rally the crowd, he fell into darkness without spotlights. The only unplanned moment came in the finale of the generous four-song encore, “Not Even Jail,” when a female fan snuck on stage to give Banks a hug and ran off into the arms of security. 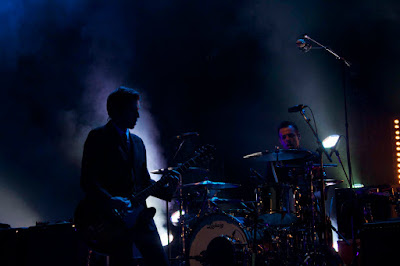