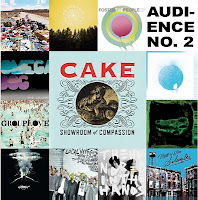 What a winter we're having in the Northeast with three major snowstorms and another one this week. At least some new releases along with some holiday gifts (CDs!) are keeping all this indoor time interesting. Here's the link to my picks for a new music listening session whatever the weather may be...

1. Foster the People -- Pumped Up Kicks
This song was found on Sirius U in another one of those moments of discovery while driving. Checking out the read out while weaving in traffic on the interstate, I found this band from LA that just released a self-titled EP. The cheery groove with singalong lyrics, handclaps and whistling make it the perfect song to kick off the playlist. While their other songs don't seem to quite merit such a spotlight, this is definitely a young band to keep an ear out for going forward.

2. Grouplove -- Naked Kids
Here's another new band out of Los Angeles. Their myspace profile photo shows them all smiles running with a banner that reads "Never trust a happy song" so don't say I didn't warn you. This one even has sounds of the beach with the cooing chorus, shout outs for singing, and a jangly tambourine beat evokes the summer time fun of perfect waves and living out dreams. Another standout in a beginner's collection, with that toe in the water self-titled EP just released has me hoping for more happy songs ahead.

3. Matt & Kim -- Cameras
This Brooklyn couple's third release, Sidewalks, may have slicker production values but retains all of the playfulness of a house band in the basement. Matt Johnson belts out the vocals while working the synths and Kim Schifino keeps the beat perfectly basic.

4. Baths -- Hall
This creation is the brain child of Will Wiesenfeld, a 21 year old from the San Fernando Valley. He throws in everything from pure piano to samples of pen clicks or running water, just for starters. When his voice is added over the hip hop beats and dreamy synths, a warm falsetto brings a welcome human element to the track. The debut release Cerulean shows a wide range of musicianship and innovation, making Baths another new artist to follow.

5. Local Natives -- Wide Eyes
Local Natives are also from Southern California, and their more traditional band set up harks back to 70s with sunny harmonies plus a laid back vibe. Their forray into world beats bring to mind the Talking Heads -- the group even covers "Warning Sign" on Gorilla Manor, their debut release from last year. This song opens the collection and invites all to the chill party atmosphere.

6. CAKE -- Long Time
7. CAKE -- Sick of You
It's been over five years since the last release of new tunes from this veteran SoCal band that put the ALT in alternative music back in the mid 1990s. They haven't missed a trick -- the new songs are full of the same wry takes on modern life with killer beats over stand out bass lines, horns and the ubiquitous vibraslap. These two tracks are just a sampling of the Cake attitude available on their new release, Showroom of Compassion, and instant classics in my mind.

8. Avey Tare -- Lucky 1
Avey Tare is actually a side project of David Portner, a founding member of the New York based band Animal Collective. This is the single off of last fall's release Down There and while things may not deviate that much from his group efforts, it's still extremely worthwhile listening.

9. Autolux -- Audience No. 2
I'ts back to the west coast for this pick -- Autolux formed about a decade ago in LA and this song off their second release Transit Transit. Their sound is full of the popular fuzzed out arrangements now known chill wave but with an edgier vibe.

10. The Dears -- Omega Dog
This Montreal based band is back with their fourth release, Degeneration Street, full of heartfelt longing under the glow of Murray Lightburn's distinctive vocals. The single "Omega Dog" begins with a tight groove but ends in a psychedelic swirl -- quite a journey for just one song.

11. The Hundred in the Hand -- Young Aren't Young
"Young Aren't Young" sounds like it took a team of musicians but it's actually a Brooklyn duo creating the entire song, with just some help with background vocals. Eleanore Everdell sings into a lo-fi bullet microphone over lushed, layered electro dance beats with a wailing guitar provided by Jason Everdell. Their other songs from the self-titled release issued last fall Dressed in Dresden are similarly styled but this one stands out for its confident and tight musical structure.

12. The Decemberists -- Down By the Water
This Portland, Oregon indie rock band just issued its sixth full length release, The King Is Dead, with all of its story telling and folk influences still going full throttle. "Down By the Water" bursts forth with a driving beat and full sound before frontman/singer/songwriter Colin Meloy deftly spins another tale.

13. Ima Robot -- Sail With Me
14. Ima Robot -- Ruthless
Ima Robot is LA singer Alex Ebert's band for the past decade -- before Edward Sharpe and the Magnetic Zeros exploded onto the scene. His warm hippy vibe presides over this band as well, leading a clapping sing-a-long at the end of "Sail With Me" and the call outs of "Ruthless." Both tracks are off of last fall's release, Another Man's Treasure.

15. Dr. Dog -- Shadow People
Dr. Dog is a group from Phili that derives its psychedic rock from hippie bands in the 1960s and early indie pop of the 1990s. This wandering, feel good song is off their 6th release of last year as their journey continues.
Posted by JaneJS at 9:34 AM
Email ThisBlogThis!Share to TwitterShare to FacebookShare to Pinterest
Labels: Autolux, Avey Tare, Baths, Cake, Dr. Dog, Foster the People, Grouplove, Ima Robot, Local Natives, Matt and Kim, The Dears, The Decemberists
Newer Post Older Post Home