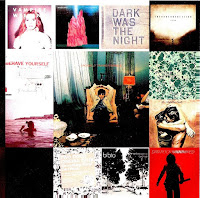 It took me a few listens of this tune by the Norwegian electro duo on kcrw's Morning Becomes Eclectic to realize the lyrics are simply a string of song titles by the Talking Heads -- pure tongue in cheek brilliance. As a THeads fan I recognized them all along with the various musical references but the best is the catchy singalong chorus (fitting in as the Mom in "Mom & Dad we're burning down the house") followed by classic "Hey" shout outs. Hard NOT to move during this one! Link to listen here.

2. One Life Stand - Hot Chip
Another awesome dance track from this British electropop band which was released last fall in advance of a new CD with same name, scheduled to drop February 9th. The sweet sentiment of having much more than a one night stand is just icing on the up beat groove and dazzling swirl of synths. I can't wait for the new collection of songs to dig into from this band that brought us the classic "Over and Over" (one of my favorite dance hits of all time).

3. Do You Want It All - Two Door Cinema Club
I've had this young Northern Irish band on earlier playlists, loving how their catchy electropop tunes are unapologetic with all access accessibility. The group is yet another one of many that met in high school which always creates a soft spot in my heart, especially as they are just entering into total legit category with a CD release of their own sometime in February. It will be interesting to hear what they have to offer in a full collection of songs.

4. Knotty Pine - David Byrne & Dirty Projectors
The Dirty Projectors were recently featured on the cover of New York Magazine with MGMT and Grizzly Bear for the article "Brooklyn's Sonic Boom," so I was eager to check them out since I was a fan of the other two bands. I found their sound a bit confusing but this collaboration with David Byrne keeps the energy reigned in and pumping along with a cohesive agenda. The track is found on a separate CD, Dark Was the Night, the 20th compilation to raise funds for the Red Hot Organization which is dedicated to fighting AIDS.

5. So Far Around the Bend - The National
This song is also off the same CD, with The National contributing their signature sound with plans in the way for a new release later this year. Their laid back approach is spirited by lead singer and lyricist Matt Berninger's warm baritone floating over the rest of the band. The group is actually comprised of two sets of brothers, friends from growing up in Ohio but now based with the rest of the indie world in Brooklyn.

6. Horchata - Vampire Weekend
As the opening track of the second Vampire Weekend CD, Contra, the song propels this band of Columbia University grads back on the scene with confidence. The title is the name of a traditional Mexican beverage which fits into their distinctive mix of world music references with the addition of classical strings. This release landed on the top of the Billboard album chart (though with just 124,000 copies sold, it's still a sad statement on lackluster CD sales.)

7. White Sky - Vampire Weekend
A foundation of crisp electronic beats sets the foundation for Ezra Koenig's vocals to introduce the story in song but the band's interjection of more "Hey" shout outs makes it fun for all. The string of vowels ending sing-a-long is a great capper to the song.

8. Cousins - Vampire Weekend
An instant classic for the band, this was the first single off the CD. It's a rollicking song telling of family ties that fall into a frenzy of ringing guitar and fast moving rhythms.

9. Blood - Middle East
This Australian band is known for creating rambling collages of varied instrumentation (including glockenspiel, trumpet, hand percussion, electric and acoustic guitars) with lush vocal harmonies. This song is part of their first EP, The Recordings of The Middle East, and with the group landing a slot at Coachcella this spring there's much more to come from this band on the big time music scene.

10. Flashing Light Means Go - The Boxer Rebellion
The band's second CD Union was named Best Alternative Album in 2009 by itunes so I was interested to give it a full listen, but only found this song that I had already heard worth putting on a playlist. It begins with a classic drumbeat but develops into a full textured sound with a dreamy chorus.

14. Who Makes Your Money - Spoon
15. Written In Reverse - Spoon
I have placed four songs off the new Spoon release Transference on my playlist as they appear in quick succession on the CD (though the web sheriff didn't like them appearing on the Grooveshark widget!) This set works as a nice introduction to the band, with its quirky beats and Brett Daniel's spare singing spewing succinct lyrics. The other three songs flow from this core sound, into the electronic keyboard chords of "The Mystery Zone" and the funk of "Who Makes Your Money." "Written In Reverse" returns to a classic Spoon approach of edgy guitar over drum beats and emotive vocals. It was hard to whittle down things at al -- most likely to be on my list of favs for 2010.

16. Ambivalence Avenue - Bibio
Bibio, a.k.a. Stephen Wilkinson, is a British music producer who actually studied 'sonic arts' at the Middlesex University in London. This track is off his second CD of three released in 2009, a prolific year of music under a variety of musical labels -- from folk/electronica to ambient music and jangle pop.

17. New Theory - Washed Out
18. Feel It All Around - Washed Out
Ernest Greene has only recently created these lush synth creations as Washed Out after exploring rock and hip hop. In an interview with Pitchfork, he explains that the 'laid-back 80s throwback feel" was influenced by his surroundings after returning home in rural Georgia.

19. The High Road - Broken Bells
The song is the first single for this side project featuring the familiar vocals of The Shins' James Mercer backed by the artistry of Danger Mouse. A self-titled album from this side project is due in March, can't wait!