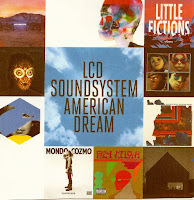 Here I go again gushing about how this year was an awesome year of music... But really when your very fave bands come out with releases full of listening goodness, what other proper response is there? With plenty of new tunes from Arcade Fire, LCD Soundsystem, and Spoon, plus those long
awaited Beck and Gorillaz albums, 2017 had me in music fan heaven. Add in beloved indie veterans (The National, The Flaming Lips, Mew, Elbow, Grizzly Bear) along with newcomer Mondo Cozmo, and it was a blissful, busy time catching up with everything across the calendar.

Give a listen on Spotify to all my Top Ten Albums of 2017 as well as Other Fave Albums of 2017 and check out my picks below with live video highlights. Also, I've created a Next New Music Matters Playlist to follow in order to see what's already cued up for 2018.

1. LCD Soundsystem, American Dream
The LCD Soundsystem songs on American Dream continued the Brooklyn band's musical thread after a long seven years – this is the fourth album since 2002 – like they never lost a beat! They also toured extensively and appeared all over the place (seen here confidently presenting "Call the Police" on the U.K. television program Live on Later... with Jools Holland) as if to make up for lost time and appease all the fans who were more than willing to buy tickets.

2. Arcade Fire, Everything Now
Arcade Fire's fifth album since 2001 caught heat for some ABBA-type dancehall leanings (see the Montreal based band rocking the title track "Everything Now" on daytime television with Régine Chassagne playing my dream instrument) but there were also plenty of soulful tracks to dig deep into, especially "We Don't Deserve Love" which is already cued up in my next Valentine's Day playlist.

3. Spoon, Hot Thoughts
Austin band Spoon returned super strong with its ninth album since 1993, acknowledging many female fans mindset by the title Hot Thoughts. Frontman Britt Daniels exhibits why during this smoking hot performance of the song, "Do I Have to Talk You Into It," to open their sold out show at Brooklyn Steel December 8th.

4. Beck,  Colors
Beck's 13th studio album Colors arrived in the fall with stylish songs across the spectrum to showcase yet again his musical prowess, but all contain the artist's mantra of group catharsis.  He also toured widely and continued to be eager to please his fans with hits old and new. Here Beck brings the single "Dream" to life in a session for his L.A. hometown station KCRW.

5. The National, Sleep Well Beast
Cincinnati-raised quintet The National is now dispersed across the country, but gathered in a newly built recording space in an upstate New York barn to create the seventh album since 1999, Sleep Well Beast. The songs seemed even stronger live, with the power of this band's groupthink exhibited on stage. Check out "The Day I Die" at the Pitchfork Music Festival Paris 2017.

6. Gorillaz, Humanz
Six years passed between albums for the animated U.K. band Gorillaz, as Humanz landed with a host of featured artists in cameos almost distracting the mission.  Damon Albarn is still the mastermind behind it all, seen here leading the way with the song "Andromeda" in a live session at New York City's WFUV.

7. Mondo Cozmo, Plastic Soul
L.A. artist Josh Ostrander, a.k.a. Mondo Cozmo, appeared on KCRW late in 2016 after the strength of a few well played singles. This new band quickly went from small venues (I was lucky to see him at the tiny Mercury Lounge in January) to playing festivals and headlining concert halls. Witness Ostrander's gritty determination here, singing the title track of his debut album "Plastic Soul."

8. Grizzly Bear, Painted Ruins
The quartet Grizzly Bear has expanded from its Brooklyn base, but the band's tightly layered sound remains in sharp focus for the fifth album since 2002, Painted Ruins.  The group dynamic is on full display here during "Mourning Sound" at the Electric Lady Studios in NYC for WFUV.

10. Mew, Visuals
Another transfixing voice that transcends our mortal coil is that of Mew's Jonas Bjerre. Angelic yet immediate, he leads the quartet into a singular space of musical brilliance for the seventh album since 1995 Visuals, as evident in "Carry Me to Safety" performance at Seattle's KEXP.

Honorable Mention: The Flaming Lips, Oczy Mlody
One more shout out to The Flaming Lips, for releasing a whopping sixteenth album since 1983 in dreary January with the title Oczy Mlody (that roughly translates to a Polish expression meaning eyes of the young) with wacked out pysch rock that still keeps us on our toes. My favorite tracks are "The Castle" and "We A Family," but this video of "There Should Be Unicorns" shows frontman Wayne Coyne's willingness to continue playing the rock star.