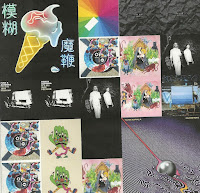 2015 was a great year for music, but I always seem to say that. Philly's NPR music station WXPN had a contest for The Greatest Year in Music recently with winners way back in the sixties but I couldn't even adhere to the idea... every year is worthy of the title if you open up to the idea!  That being said, 2015 started off with a blast of Kevin Parker of Tame Impala singing Mark Ronson's "Daffodils" which was only a warm up for his band's release Currents, probably my favorite of the year. Other more-than-just-pleasant surprises appeared on the scene from Blur, Mew and Deerhunter plus follow ups from Father John Misty and De Lux. Plus Jamie xx of the xx struck out on his own into the dance party fantastic as Dan Deacon continued to light up the neon covered sweat, and Matt Berninger of the National finally got to that long-discussed collabo with Brent Knopf of Ramona Falls and Menomena for a melodic free form groove. And I'm always a softie for some acoustic songs straight from the heart -- this year Ivan & Alyosha easily filled that need.

Dig into all my Top Ten Albums of 2015 as a Spotify playlist along with Other Fave Albums of 2015, and read up on my Top Ten below. Many of the video highlights are from my go-to online radio stations KEXP and KCRW, both of which are moving into larger spaces to accompany more of an audience for live sessions. But there's something about being right in the band's faces (KCRW uses a classroom at Santa Monica College while KEXP looks like large closet) without a crowd's applause, only the sweet silence of awe on my part. Thinking I'm actually going to miss this "fly on the wall" view, especially when I can catch things as they happen live. Oh well, there's still WFUV with similar constraints on space, although videos are posted weeks later.

1. EL VY, Return to the Moon
EL VY appeared as a new band with a strange and confusing to pronounce name, as familiar band greats Matt Berninger and Brent Knopf took their friendship to another level. The sound turned into a fun ride into more stream of consciousness lyrics wryly conveyed via Berninger's mellow baritone. The pair appeared on KEXP with touring musicians in customized outfits to match the polka dots in the background. During the interview Knopf jokes about The National's "depressing music" and the reaction is just priceless, check it out  at 12:58 in the video for the entire session. Here's the melancholy song "Need A Friend" which brought a poignant end to the set.

2. Blur, Magic Whip
Blur fans couldn't believe their lucky ears when Blur released its first album since 2003. (Thanks to a cancelled festival in Tokyo, the guys were stuck with days worth of time on their hands so naturally started jamming!) With the return of the full lineup Blur was back in fine form, especially with Graham Coxon's stellar guitar riffs. Here's the video for the rockin' "I Broadcast" created with fan footage.

3. Dan Deacon, Glass Riffer
Baltimore electronic musician Dan Deacon might sound like he's just flipping synth switches but he actually uses vocal manipulation to add a live human aspect to production and performance. Glass Riffer is Deacon's eighth album since 2000 as the dance party continues thanks to his busy touring schedule, including a stop at KCRW last spring. Listen and watch the complicated dedication behind "When I Was Done Dying" or indulge in the entire session archived online.

4. De Lux, Generation
L.A. band De Lux provided my song of the summer with "Oh Man The Future," first featured as the Song of the Day on KCRW. The band's singer Sean Guerin brings fond memories of a lanky David Byrne, both in delivery and random references. De Lux also stopped by the KCRW studios and you can also listen to the full session from this synthpop youth sensation.

5. Deerhunter, Fading Frontier
This fall brought a seventh album from fave band Deerhunter, a collection of songs full of hopeful promise and gleaned over pop thanks to frontman Brandon Cox's being hit by a car of all things. Instead going into the dark depths of life that has also included being born with the genetic disorder Marfam syndrome, Cox has embraced life within a band and we are all the recipients of his gifts. This sweetly sung single "Breaker" has Cox sharing the lead vocals with high school pal Lockett Pundt who has long been in the band. The full live session with Deerhunter is in the KCRW archives, along with a lengthy interview with Cox.

6. Father John Misty, I Love You Honeybear
It's hard to believe Josh Tillman a.k.a. Father John Misty, was once a backup musician for Fleet Foxes. As his own frontman he commands the sound and the stage with his wacky worldview, glorious vocals and glistening guitar (listen for the first chord that provides the intro for "Chateau Lobby #4 (in C for Two Virgins" during this recorded session at the WFUV studios).

7. Jamie xx, In Colour
Jamie Smith, member of the U.K. band xx, released an album of his side interest in dance music to much acclaim this year as Jamie xx. In this video for "I Know There's Gonna Be (Good Times)," there are glimpses of this dj working the controls along with the adoring crowds with his magic.

8. Tame Impala, Currents
Tame Impala's single (if you can even call this epic 8 minute song that) "Let It Happen" lifted off into airplay last spring with its extended musical carpet ride ready for all to hop aboard. The album was released months later, full of R&B influences and synth swagger, and is now a Grammy contender for Best Alternative Music Album.

9. Mew, +-
Danish band Mew also returned to a former lineup with success this year.  The band released its sixth album called +-, the first since 2009. While the group describes itself as "indie stadium," they squeezed into KCRW's studio for a live session this fall. I just swoon over Jonas Bjerre's angelic vocals that cut straight to the core. Listen to "Sometimes Life Isn't Easy" or the entire session and prepare to be musically moved.


10. Ivan & Alyosha, It's All Just Pretend
Seattle's five piece folk pop band Ivan & Alyosha released a sophomore album this year, with savory melodic tunes sung with hearts on those flannel sleeves. Check out this song "It's All Just Pretend" during a live session at their local station KEXP, or settle in for the entire performance to see exactly what I mean -- it's well worth a listen.