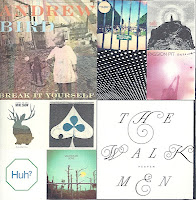 This week PopMatters posted The 75 Best Albums of 2012 from compiling top ten lists from staff writers.  I also contributed a write up for Passion Pit's excellent entry, Gossamer (#66). Reviewing this article is another opportunity to discover bands not already on your radar, so I highly recommend taking the time to dive in.

My personal top ten is listed here with video highlights -- chosen on the basis of how excited I was about the album before it came out (sometimes months before the release date) to how much I visited the songs once it did. Together it represents over seven hours of happy listening. And I must say, 2012 was a fine year for new music!

1. Grizzly Bear, Shields
The Brooklyn indie band Grizzly Bear built upon the success of their third album in 2009, Veckatimest, with a confident collection in Shields.  Featuring the songwriting skills of Edward Droste and Daniel Rossen as produced by band member Chris Taylor, the songs are varied and rewarding in a multi-layered, thoughtful presentation.

2. The Shins, Port of Morrow
James Mercer returned with a revamped line up for his fourth album as The Shins, after the acclaimed Broken Bells side project with producer Danger Mouse.  For fans waiting five years since 2007's Wincing the Night Away, Port of Morrow continues on that secure path of indie indulgence.  Mercer's warm tenor leads the way, through new subjects of fatherhood and adult responsibilities plucked straight from his domestic life.


3. Passion Pit, Gossamer
Gossamer was released as the sophomore album from Boston area based group Passion Pit, but it was really the solo project of frontman Michael Angelokos (which is actually how the band began).  Angelokos wrote and produced the songs, with vague references of his own mental strife as he continued a battle with bi-polar disorder.  Yet the music remains as strong as ever, a full frontal indie electropop that reads well on stage as evidenced when Angelokos appeared on SNL earlier in the fall.

5. Spiritualized, Sweet Heart, Sweet Light
Jason Pierce (a.k.a. Spaceman) released his seventh album as the frontman of U.K. alt rock band Spiritualized, Sweet Heart, Sweet Light.  The songs pour out from Pierce's harrowing experiences with chemotherapy for liver disease, with swells of musical transcendence and uplifting choruses.  (The Huh? on cover art refers to the original working title, in case you're wondering!)

6. The Walkmen, Heaven
The Walkmen released their seventh album over a decade, Heaven, and celebrated time together as a indie rock band plus the years since high school in the Washington, D.C. area.  While the group's early days were spent in New York City, members have moved to Philly and New Orleans as they began another stage into family life. Their devotion to each other is seen and heard in the video for the title track here, with solid songwriting that favors vintage instruments and persistent guitar work.


8. Miike Snow, Happy To You
Miike Snow is a Swedish indie pop band with the producing team Bloodshy & Avant (Christian Karlsson and Pontus Winnberg) and American vocalist Andrew Wyatt.  Their sophomore album, Happy To You, finds the trio flaunting their self-made studio ways, utilizing all the tools to achieve hooks galore.  This video could use some explanation, however!

10. Andrew Bird, Break It Yourself
Chicago area native Andrew Bird has released nine plus albums of music as composer and muli-instrumentalist.  Break It Yourself features fourteen complex compositions with Bird on guitar, violin and vocals (including lots of whistling!)