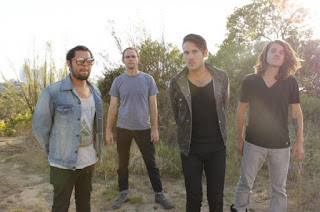 It may have been a support slot but Voxhaul Broadcast took the stage at The Gramercy Theatre as a seasoned touring band ready for their breakthrough moment. Way before their full-length debut release Timing Is Everything appeared March 22, the L.A. based group was mentioned on the local taste-making radio station KCRW’s “Most Played” lists of 2010. They began with “Blackout” which is on heavy rotation there and being picked up elsewhere. It was played to tempo, not frantically sped up in the excitement of live performance, so things could rightly build as with shout outs adding to the party atmosphere.


Next up was “Leaving on the 5th,” another confident entry with their sound mixing rock, r&b and soul influences. Singer/Front man David Dennis doesn’t just take care of lead vocals -- he’s a storyteller using gestures to illustrate the lyrics, all while playing guitar. The catchy pop hooks have emotional payoffs and the musical structure of the songs aren’t rigid; they ebb and flow with dynamics. Dennis and guitarist Anthony Aguiar, along with bass player Philip Munsey, worked the edge of the stage to keep the audience part of the show. The muscular intensity of Kurt Allen on the drums propelled “Cheetah,” a big crowd pleaser. The set ended with the full on sound of “Back Rooms,” with an all hands on deck approach and screaming vocals. Voxhaul Broadcast will be back in New York City headlining shows May 5 (Webster Hall) and May 6 (Mercury Lounge). It’s clear they’re ready for the spotlight.
NMMatterscorp YouTube Video "Leaving on the 5th"
Posted by JaneJS at 8:32 PM
Email ThisBlogThis!Share to TwitterShare to FacebookShare to Pinterest
Labels: Voxhaul Broadcast
Newer Post Older Post Home